Developer Shawn McIntyre, a partner and senior vice-president of North American Properties (NAP), was the only respondent to the Community Redevelopment Agency’s (CRA) second go-round for proposals after the first request netted no bites, the Tallahassee Democrat reports.

McIntyre presented the project to the CRA’s downtown advisory board on Jan. 10, which offered its endorsement. The next step takes place on Jan. 26 (today) when the CRA decides whether to negotiate a deal with NAP or go another route.

If approved, the downtown plan would result in the sale and redevelopment of the Firestone and Bloxham Annex buildings and would be the the largest CRA project for downtown. Orlando-headquartered architect Baker Barrios has provided renderings of the proposed design.

“This project has many components that you wouldn’t typically find in one project,” CRA executive director Roxanne Manning has been quoted as saying. “We wanted someone who could come in and preserve the buildings, if possible, and come up with a use for them that could work.”

The project also requires an urban planned unit development agreement that’s a zoning process giving the developer some flexibility to come up with a creative project for the area. It also provides more certainty on how it will be built, look and function.

The CRA’s request for proposals says  the housing would be mid-rise apartments and many units would overlook the park and downtown. 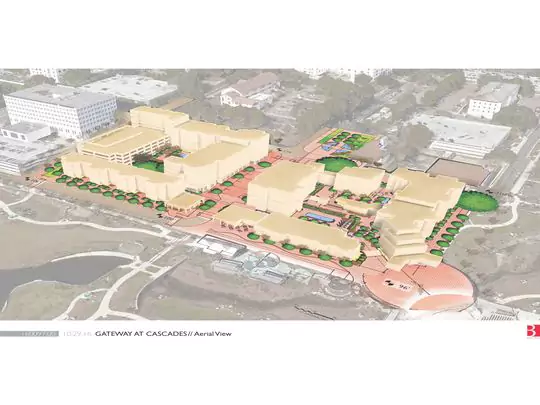 “Housing types will seek to appeal to multi-generational users and reduce the number of absentee owners in downtown Tallahassee, bringing diversity and activity,” the RFP states.

“We are excited about the potential to continue our work in Tallahassee with the development of an iconic, mixed-use destination that captures the spirit of Tallahassee and leverages the public investment in Cascades Park,” McIntyre said. “Should the CRA decide to move forward with our proposal, we anticipate working closely with the city and various community stakeholders to determine the firm and final vision for the project.”

NAP, which has more than $1 billion of development in six states, plans to partner with Uptown Rental Properties, the newspaper reported.

The CRA’s first attempt to attract a viable developer was too restrictive, city officials said. The second proposal carved out room for details to be finalized later if it moves forward.

At 24 acres, Cascades Park is Tallahassee’s version of Central Park disguised as a massive storm-water facility in a public park. The $34-million infrastructure project was paid for with Blueprint sales tax funds and it may stimulate economic development, just like Gaines Street.

“I just keep getting amazed every time I see the interests. When they came in with this proposal, it was more than we could even think about at the time,” said Wayne Tedder, assistant city manager for development services and economic vitality, of the park’s early planning. “We certainly thought that residential was an important component and commercial, kind of activating that area and basically creating a sense of place at Cascades Park.”