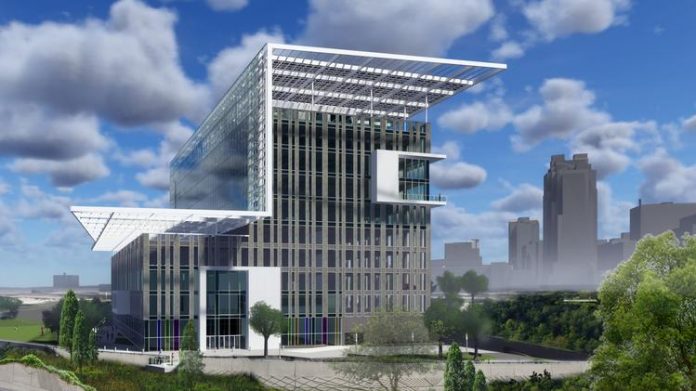 A group of Raleigh designers and developers have been working for months on plans for what architect Robbie Ferris says will be the first energy positive, high-rise building in the United States.

“Well, the first that we know of,” Ferris told the Triangle Business Journal. By “energy positive,” he means that the $70 million, 10-story structure planned on a nearly 6-acre site two blocks south of the Raleigh Convention Center and Red Hat Amphitheater will produce more energy than it consumes.

City Gateway will be home to the Exploris K-8 charter school and a number of other businesses. SfL+A Architects has designed the building who have worked on a few other projects including energy positive schools. That means City Gateway will “on average over the year produce more energy from renewable energy sources than it imports from external sources,” according to the Global Buildings Performance Network.

The business publication reports that the project at 120 Kindley St. should break ground in July with completion in 2018.

There will be about 140,000 sq. ft. of Class A office space above the school. The development will include a parking deck and rooftop terrace with its own café, fitness trail and meeting spaces.

Ferris is using resources of both SfL+A and Firstfloor Development Co. for the project, both of which in recent years have worked on projects with public, private and charter school programs to find a way to save school districts money through public-private partnerships and by cutting campus energy consumption.

City Gateway is also expected to be the first phase of a much larger innovation center that Ferris and his partners foresee for the property. Early schematics for the property show enough space to for a second office tower of 20 to 25 stories high, one or two hotels of up to 400 rooms, and space for what Ferris describes as an “iconic” building to anchor the city’s southern gateway into downtown.

“Six acres of land is a huge tract of land for downtown Raleigh,” he says. “We can do a lot with it.”