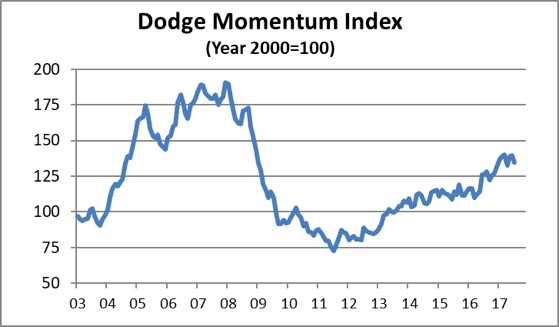 The move lower in July was due to a 6.6% decline in the institutional component of the Momentum Index, while the commercial component fell 1.1%. This month continues a recent trend of volatility in the Momentum Index where a string of gains is interrupted by a step backwards in planning intentions.

The decline is especially apparent in New York, as developers are putting the brakes on initiating more projects, according to data provided to the Commercial Observer by Dodge Data & Analytics.

The dollar volume of commercial and multifamily building construction starts for the first half of the year fell 27 percent to $7.2 billion from $10 billion over the same period last year. That’s also a staggering 63 percent fall from the first six months of 2015 when it was $19.3 billion, the data indicates.

In July, nine projects entered planning each with a value of $100 million or more. For the institutional building sector, the leading projects were the $200 million Kaiser Permanente Medical Center in Woodbridge VA and the $200 million phase 2B of the Thompson Education Center in Rock Hill (See separate story). The leading commercial building projects were a $177 million Amazon fulfillment center in North Randall OH and the $170 million Pala Casino and Resort in Pala CA.