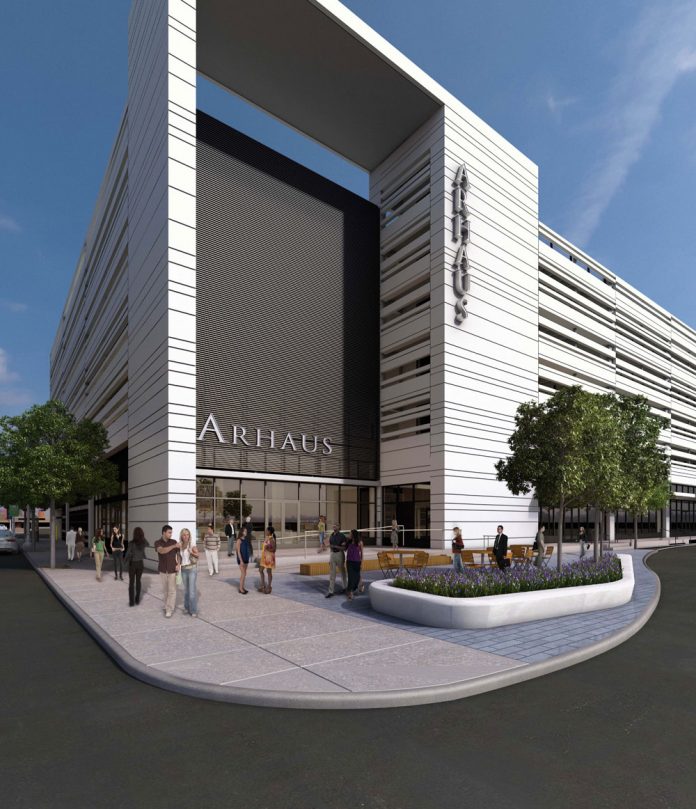 Arhaus will anchor the retail component of the mixed-use, transit-oriented development located in the heart of Downtown

The Domain Companies has secured financing for and commenced construction of the second building in The South Market District, a mixed-use transit-oriented development in Downtown New Orleans. The Park at South Market features 27,000sf of retail space, a public plaza and 440 garage parking spaces that will also serve the retail and residential space in The Paramount at South Market. Both buildings will be complete by October 2014.

The South Market District combines luxury apartments with retail, restaurants and entertainment venues in the heart of New Orleans’ historic downtown core. The District encompasses a four-block area that runs along both sides of Girod Street, from Loyola Ave. to Baronne St.. The District is located adjacent to the Union Passenger Terminal and the recently completed Loyola Avenue streetcar line. Located across from the Superdome and New Orleans Arena, the site connects the Central Business District, historic Warehouse/Arts District and the Sports Entertainment District. Featuring modern architecture that compliments its historic surroundings while maximizing ‘green’ and sustainable design, The District will ultimately include over 700 new apartments and 170,000 square feet of retail space. 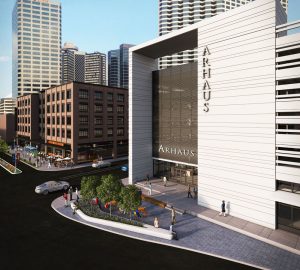 The Park sits on the corner of Girod St. and O’Keefe Ave/, directly across Girod from Rouses and across O’Keefe from The Paramount. Designed by New Orleans architectural firm Eskew Dumez and Ripple, the five-story building features an innovative modern design that remains contextual with the architectural influences of the Warehouse District. The Park will be the first public garage in New Orleans to offer electric car- charging stations and will feature bike storage and a bike-sharing program for South Market residents and a car-sharing program available to the public. The building’s open rooftop has been designed to accommodate District-wide events such as movie nights. Domain worked with the Downtown Development District to secure oversight of a landscaped bump-out at the Girod Corner. Domain will incorporate the space into a new 2,200 square foot public plaza by adding new hardscape, landscaping and seating, activating the space and creating a central outdoor focal point for the District.

At the Girod/O’Keefe Corner, the national home furnishings retailer, Arhaus, has leased 15,500 square feet, anchoring the retail component of the project’s first phase. Arhaus is known not only for its exclusive assortment of furniture and accessories handcrafted here in the states and all over the world by independent artisans and partners, but an in-store experience that is unlike any other in its category. “This is truly an ideal setting for us and we’re thrilled to be able to introduce Arhaus to New Orleans. We believe that retail is theater and our stores are a compelling testament to this!” says President & CEO John Reed. “This new store location is surrounded by like brands at a destination point in the core of the city. We’re anxious to begin the build-out of our space and open our doors in New Orleans so customers can experience home fashion from our point of view.”

The South Market District store location marks Arhaus’s first in Louisiana—according to Reed additional sites are on the radar for future growth. Arhaus, the name inspired by Denmark’s port city Aarhus (pronounced ar-hoos), opened its first store in 1986 and today operates 46 locations and an ecommerce site at Arhaus.com.

Along with Arhaus, local pet grooming and supply retailer Fetch will take the remaining 1,500 square feet. “We are tremendously excited to introduce Arhaus to New Orleans. “Arhaus’ unique global style is the perfect fit for New Orleans. Attracting a retailer of Arhaus’ stature was essential to defining the retail at South Market and is a huge win for downtown” said Matt Schwartz, Principal of The Domain Companies. “Furthermore, adding essential services like Fetch will continue to solidify the Warehouse District and CBD as a vibrant, 24-7, mixed-use neighborhood”.

Total development costs for The Park are $21.3 million, bringing the total investment in South Market’s first phase to over $70 million. First NBC Bank provided a $16 million construction and permanent loan for the project, enhanced with New Markets Tax Credits from the bank’s 2012 allocation. First NBC also provided over $2 million in NMTC equity investment. “We are proud to be part of the continuing redevelopment and rebuilding of our community,” said First NBC Bank President and CEO Ashton J. Ryan Jr.

Equity for the project was provided by The Domain Companies and byWoodward Interests, an affiliate of Woodward Design+Build, the project’s general contractor. The Industrial Development Board of the City of New Orleans, working with the New Orleans Business Alliance, provided a creative 12-year Payment in Lieu of Taxes arrangement to help facilitate the project. The project will also benefit from state legislation passed to enable mixed-use Transit-Oriented Developments to participate in the LA Enterprise Zone program.

“South Market District is one of the flurry of projects and announcements breathing new life into Downtown New Orleans and propelling New Orleans into one of today’s top retail markets for investment,” said Rodrick Miller, President and CEO of the New Orleans Business Alliance. “I am tremendously excited to support the South Market District as the largest mixed-use transit oriented development in our city right now, and a catalyst for continued growth in the future. The New Orleans Business Alliance is proud to have worked with the Downtown Development District, the Industrial Development Board, the City, and others to bring this project to fruition.”

The project is designed to position Girod as the focal point of the district and transform the street into a vibrant, pedestrian-oriented, shopping and entertainment district. To accomplish this, Domain worked with City and State Agencies to secure approvals to close a traffic lane on Girod and widen the sidewalks from approximately seven to approximately twenty feet wide. The Girod work will be completed in April. In addition, Domain worked with neighboring communities to permit sidewalk cafes in the area and provide for expanded café operating hours throughout the District.

“South Market is a game-changer for Downtown New Orleans in many ways,” said Kurt Weigle, president and CEO of the Downtown Development District. “On the retail front, the attraction of a high quality brand like Arhaus to downtown is a strong testimonial to the strength of retail demand, and it’s a wonderful amenity for those of us who live Downtown. Same goes for Fetch. They fill important needs of downtown residents, and they send a message to other retailers that this is a place they need to be.”

The Paramount at South Market features 209 apartments and 22,000 sq. ft. of retail which will include an eclectic mix of food and beverage tenants. Domain plans to being announcing tenants in the Paramount in the coming weeks.

In a further District update, Domain plans to begin construction of “The Beacon”, the District’s third building, in late summer 2014. Opposite The Paramount on Girod, the building will feature 114 apartments and 20,000sf of retail, occupying the front-portion of the block. By phasing this the development of this block, Domain will increase the District’s overall density. Plans for South Market now call for over 700 new apartments, 170,000 square feet of retail and $250 million in investment by the time the District is completed at the of 2017.

Retail leasing and consulting services for the project are being provided by Terremark Partners of Atlanta, GA. Parties interested in leasing retail space in future South Market phases can contact Craig Kaser at cnkaser@terremarkpartners.com.