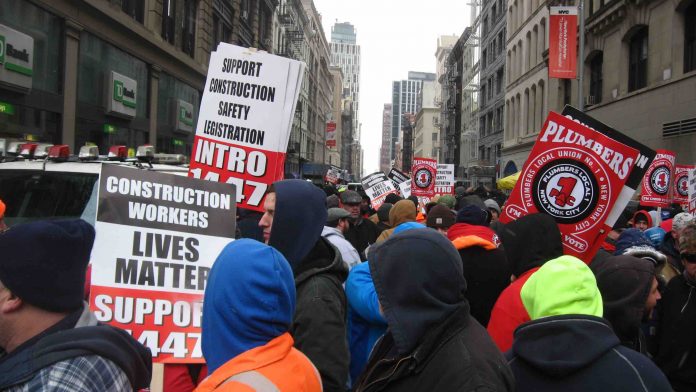 New York City Council is expected to vote on a controversial bill requiring construction safety training for local projects on Sept. 27, following changes to the legislation that reduce the mandated training hours for many workers from 59 to 40 and create a fund to support the training costs for city and community groups.

The legislation (Bill 1477) has been a subject of contention between local labour unions — who have advocated for it — and opponents, who see it as a barrier to non-union and minority contractors.

In the latest version of the bill, workers will need to complete the minimum 40 training hours by Dec. 2018, but there is an optional extension to Sept. 2020, if the NYC Department of Buildings determines there aren’t enough training facilities available for workers to meet the deadline. (The shortage of facilities was one of the concerns of the bill’s opponents.)

In the shorter term, by March 2018, workers will need to complete the equivalent of OSHA 10, a 10-hour course sponsored by the Occupational Safety and Heath Administration.

The bill then requires workers to complete an additional 30 hours of training. At least eight of those hours will pertain to the dangers of falling workers and objects at construction sites, according to the bill.

There are exceptions for natural disasters, projects under four stories in height, and for community and voluntary projects.

The Real Deal reports that the hearing room at 250 Broadway on Sept. 19 was packed with people, many wearing shirts that said, “Don’t Take Our Jobs Stop 1447.”

The Real Estate Board of New York (REBNY) and other organizations had opposed the legislation. Some opponents expressed frustration that the latest version of the bill was posted only hours before the committee hearing.

“We were blindsided,” said Martin Allen, president of People for Political and Economic Empowerment. He said the bill will favor large corporations, since they have the deep pockets to pay for workers to complete the training.

RENBY and open shop groups, especially the Associated Builders and Contractors (ABC) have battled against  the three different iterations of the bill, which they’ve argued disproportionately favor union contractors and would harm minority workers.

REBNY president John Banks said the latest bill was an improvement but failed to address “basic questions like ensuring there will be sufficient training providers or how workers without an on-going relationship with a contractor will pay for and obtain training.”

“This legislation runs the risk of putting tens of thousands of construction workers on the unemployment line,” he said.

On the other side, outside the city council building, workers passed out flyers urging the bill\’s passage. The flyer had a picture of Fernando Venegas, a 19-year-old worker who died at a construction site in Bed-Stuy in 2015, The Real Deal reported.

Council member Robert Cornegy said he had concerns about the legislation\’s fast pace and the fact that many of the construction deaths over the last several years were minority workers. He urged the City Council to take a close look at how minority workers will be impacted by the legislation. Still, he supported the bill.

“We can walk and chew gum at the same time,” he said.

As part of the bill, the City Council will dedicate $5 million to the city and community groups to contribute to the training efforts.