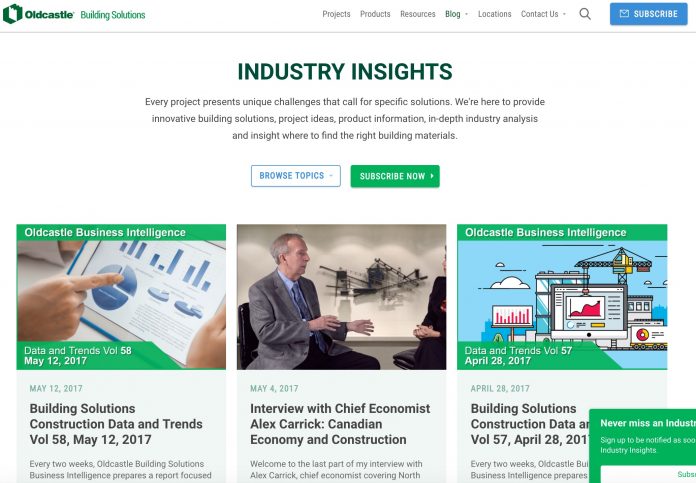 When the dust settled, Oldcastle Building Solutions rightfully deserves recognition as the runaway winner of the 2017 Best Construction Blog competition.

The solid blog, combining technical, safety and human-interest content in an effective and functional media/publication design framework, earned its success among 30 competitors both in popular vote and through the independent judges, who reviewed the seven blogs who received the most popular votes.

Of course, larger organizations with a diverse network of employees, clients and vendors can structure “get out the vote” campaigns and swamp the competition. That is why, several years ago, we introduced an independent judging panel.

There were five judges this year and each were invited to pick up to three favourite blogs, in ranking order.

The judges were not universal in their opinions though three selected Oldcastle as their favourite. (Three votes were given to each judge’s first place choice, two for their second, and one for their third. If they didn’t select a second or third choice or — in one case nominated two equally — I adapted the vote data accordingly.)

Here, Oldcastle scored nine votes, while sixth-ranking Let’s Fix Construction received seven votes and third place (in popular vote) Korte Co. received 5.5 votes from the judges. (The half vote is explained by the fact that one judge nominated the second and third place blogs equally, so I set that vote at 1.5 each.)

Here is the Construction Marketing Ideas review of the Oldcastle blog.

I then used a multiplier calculation to weigh the popular vote against the judges’ ballots.

Here Oldcastle blew away the competition with 392 points, while Korte received 50 points and Let’s Fix Construction received 37 points. The multiplier technique seems to come up with a fair response. While undoubtedly Let’s Fix scored better with the judges than Korte, Korte still scored significantly better in the popular vote. However, objectively I think things were quite close and would view the two blogs as true finalists for second place.

Judges were invited to provide reasoning for their votes, but not required to explain their decisions. I think these observations from one of the judges about Oldcastle Building Solution’s blog are worthy of repeating here.

Matt Handal, a marketer who operates helpeverybodyeveryday.com, providing guidance for marketers in the ICI market, especially in proposal writing;

Heather Seftel-Kirk, a freelance writer for the Construction News and Report Group of Companies; and

Vivian Astroff, my wife, but also a professional writer and editor by trade.

I’ll reach out to Oldcastle and write a more comprehensive review and discussion about the blog in the next few weeks, and also hope to connect with the second and third place finalists to learn more about their success.

Meanwhile, unlike previous years, we’re opening the nominations for the 2018 competition now — rather than in December — allowing companies to enter any time they wish. The advantage of the year-round nomination process is that I can immediately include the nominated blogs in the ongoing blogs and resources section.

As in previous years, the nominations will close Jan. 31, 2018 and voting will continue through February and March.

Fill out my online form.