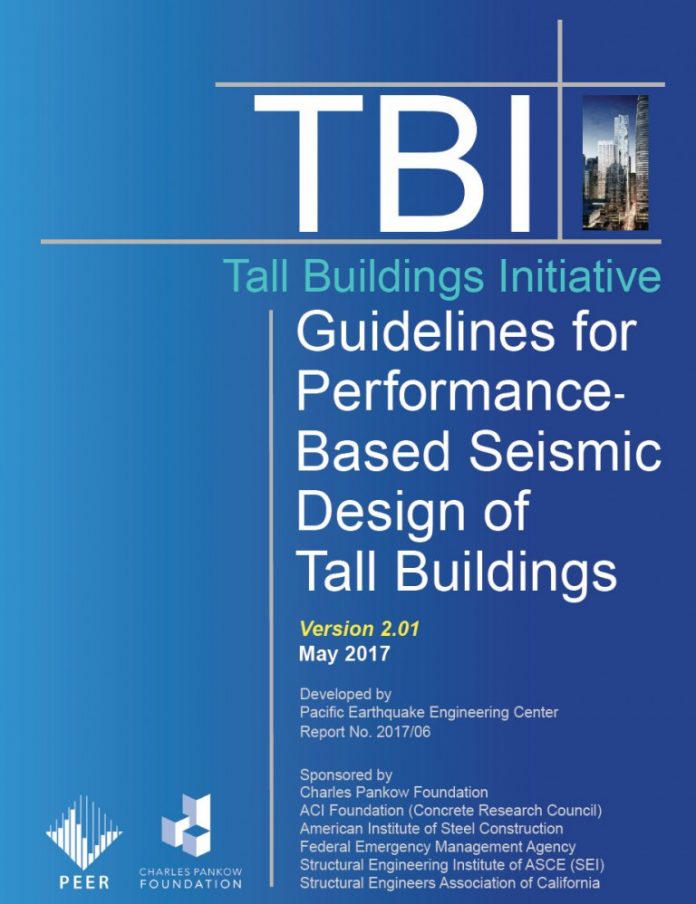 The Pacific Earthquake Engineering Research Center (PEER) has released the second edition of its Tall Building Initiative Guidelines for Performance-Based Seismic Design of Tall Buildings. Sponsored by the American Institute of Steel Construction (AISC), Charles Pankow Foundation, Structural Engineering Institute of ASCE (SEI), Structural Engineers Association of California, Federal Emergency Management Agency and ACI Foundation (Concrete Research Council), it serves as an update to the first edition of the document, which was released in 2010.

PEER developed the first edition in response to the growing use of alternative seismic design approaches that go beyond the typical prescriptive requirements of building codes. The document has become a significant reference for structural engineers, and the profession has gained substantial experience in applying these alternate techniques to designing tall buildings.

The use of performance-based seismic design for tall buildings now encompasses structural systems beyond the core wall-reinforced concrete systems (which were the focus of the first edition), irregular structures and building complexes that include multiple towers on a single podium. This second edition addresses lessons learned in application of the first edition and reflects current knowledge and state-of-practice.

“Typically, the tall buildings using these guidelines take exception to one or more code requirements and, as such, use them to justify the building’s performance as being equivalent to a code-prescriptive design,” said John Hooper, SE, a senior principal with Magnusson Klemencic Associates, Inc., and one of the document’s authors. “Numerous updates were made to this new version, including compatibility with ASCE 7-16 and its newly rewritten Chapter 16: Nonlinear Response History Analysis, with AISC’s LRFD (load and resistance factor design) approach.”

“I believe that this second edition represents a significant step forward in the performance-based seismic design of tall buildings,” expressed James O. Malley, SE, a senior principal with Degenkolb Engineers, Inc., and another of the document’s authors. “Lessons learned from project applications and major advances in our analytical and ground motion estimation capabilities over the last decade have been incorporated. When combined with ASCE 7-16 and standards such as AISC’s Specification and Seismic Provisions, we hope the updated version will be an important resource for engineers designing tall and other unique structures.”

“This edition of the guide incorporates the most recent research in seismic design,” noted Larry Kruth, AISC’s vice president of engineering. “This includes methods for using items such as steel plate shear walls for the lateral force resisting system. It’s very comprehensive.”