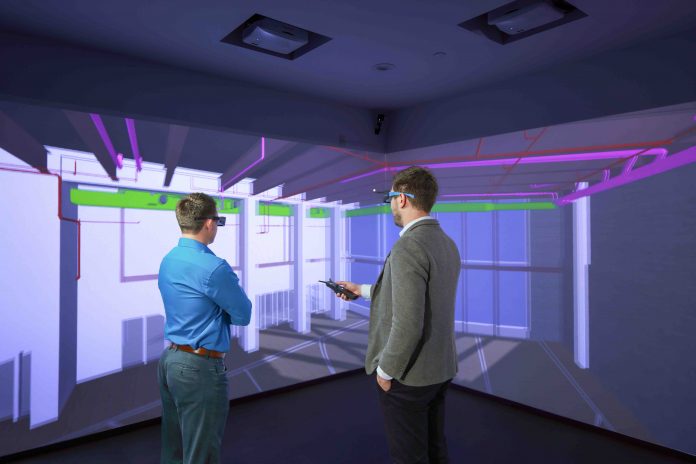 Boston-based Suffolk Construction has opened in New York City the first of what will be six Smart Labs in the heart of its key U.S. offices.

The labs are showcases for demonstrating the company’s technology engagement to prospective customers, but they are designed, equipped and staffed primarily to create a support system for data-based decision-making, innovation assessment, and sharing and scaling up the deployment of productivity-enhancing tools, from trials to jobsites and, ultimately, throughout the company, Engineering News-Record (ENR) reports.

“We’ve said that one of the objectives with the Smart Lab is to drive initiatives,” ENR has quoted Christopher Mayer, the contractor’s executive vice-president and chief innovation officer as saying as he demonstrated the lab at the company’s One Penn Plaza offices.

“And so, if the initiative is to focus on aligning the process so that the data flowing in can be brought together in an integrated way to create better visibility and more value, then that would be (an example of where we will leverage the Smart Labs.”

Mayer credits Suffolk’s owner, chairman and CEO, John Fish, as being the program’s real driver. He declined to disclose the labs’ costs, other than to say they are “a significant investment.”

Suffolk has about $3 billion in annual revenue with some 1,800 employees around the U.S., Mayer said. In addition to the NYC site, Smart Labs are under construction in San Francisco, Miami and Tampa, FL, and Boston, and one will open in Los Angeles in 2018.

A Suffolk news release says the labs include these features:

There’s also a training and innovation development area, part of the company’s Build Smart initiative. Regionally, project managers will be introduced to new tools and receive feedback — then the regional mangers will roll up that information to the company’s national level.

“We are looking to drive from awareness to engagement to adoption of the general opportunities that are surfaced as we see new technologies and new solutions,” Mayer said.

From the lab creators’ and managers’ points of view, the closest points of contact with the project owners “are the people doing the work out on the jobsites,” Mayer said.

“It’s part of our data operations teams’ day-in, day-out (jobs) to make sure the models are correct, that the execution is consistent with the models, and that we are appropriately anticipating and planning for the things that would otherwise allow for safety, schedule or quality to slip—the things that are ultimately our priorities. (Those are) safe worksites, highest possible quality of delivery and overall performance on the job,” he says.