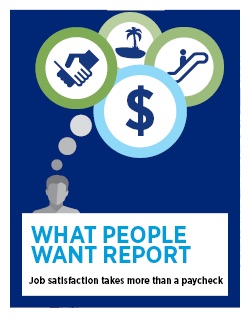 Base salary isn’t the sole driving force for construction professionals when considering a job offer, according to a new report datelined from Tampa, FL from Hays US, which says it is the largest specialist recruitment firm in the world.

While salary remains the single biggest consideration, it is outweighed by the combination of benefits, company culture, and career growth when deciding whether to accept a job offer or stay in a current role.

The Hays What People Want Survey gathered insights from more than 2,000 employees across the USA, offering a snapshot of the priorities of the American workforce when it comes to salary, benefits, culture and career development. Respondents were asked about what they considered to be most important in their current role and when considering other opportunities.

Sixty five percent of construction respondents said they would take a pay cut for their ideal job, leading Hays to recommend that employers focused on attracting top talent should look beyond base salary. The same proportion say they would accept a drop in base salary in exchange for an increase in performance-related bonus. Generation Y were the most likely to accept a pay cut for either their ideal job or for an increased bonus.

However, employers may face an uphill battle for retaining their workforce. Less than half (46%) of respondents are happy in their current role and 81 percent say they would consider leaving their current role for the right offer. Those most at risk of leaving are Generation X employees, who reported feeling more workplace stress, less work satisfaction, and were more likely to be considering leaving, compared to other generations.

“Construction professionals are happier and less likely to leave compared to other industries, which is good news for employers worried about retention,” said James Hawley, Hays US executive vice-president. “However, that makes recruitment even more of a challenge. Culture is especially important to construction professionals, so employers need to make sure they have a good work environment, and that they are promoting their culture to attract the candidates they need.”

Key findings across all sectors:

Getting past the paycheck: The survey indicates that there is an expectation that work should deliver more than just a paycheck. This shift may partly be attributed to the rise in Generation Y workers, now the biggest cohort in the workforce with Baby Boomers bowing out. As this group reaches their mid-30s and become managers and senior managers, preferences for informal work environments and increased focus on career growth are becoming more pronounced in the workforce. Generation Y was most likely to say they would take a pay cut of more than 10 per cent for their ideal job.

Curating culture: There is no shortcut to strong company culture. While free lunches and team drinks are nice-to-haves, open communication, strong leadership and work-life balance top people’s wish list. 47 percent of all US workers actively looking for new positions say company culture is the main reason.

Beefing up benefits: Benefits are almost as important as culture when considering a job offer, with a signing bonus and financial support for training topping the ‘most wanted’ list. Employers who offer health and dental, 401k contributions, and paid vacation time are probably not standing out from the crowd. Three-quarters of employers offer health and dental, two-thirds offer 401k and three or more weeks of paid vacation.

Generation X are unhappy, overwhelmed, and ready to move. Only 41 percent are happy in their role, 51 percent experience high or very high workplace pressure, and one-third say they are ‘highly likely’ to consider leaving their current role. Generation X rate work-life balance very highly for company culture and more than half say they want benefits such as time off in lieu, paid overtime, ability to work from home, and flexible work hours.

Generation Y rank career growth highest of all demographics when considering a job offer and weigh salary lower compared to other generations. Asked what contributed to career growth, Generation Y showed they are savvy about what it takes to excel at work, citing internal job opportunities, relationships with their manager, exposure to senior leadership, and networking as most important.

Baby Boomers are most likely to be satisfied in their current role (48%), and least likely to consider leaving (77%). Those who say they would leave prioritize salary and culture as the main reasons they would consider another role.

Respondents who said they prefer contracting were 19 percent more likely to say they were happy in their current role and are experiencing less workplace pressure than full time workers.