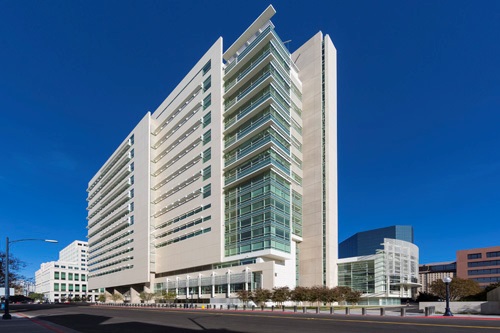 The U.S. Courthouse, San Diego has earned national recognition in the 2014 Innovative Design in Engineering and Architecture with Structural Steel awards program (IDEAS2). In honor of this achievement, members of the project team will be presented with awards from the American Institute of Steel Construction (AISC) during a ceremony at the courthouse on Wednesday, June 11, at 2 p.m.

Conducted annually by AISC, the IDEAS2 awards recognize outstanding achievement in engineering and architecture on structural steel projects across the country. The IDEAS2 award is the highest, most prestigious honor bestowed on building projects by the structural steel industry in the U.S. and recognizes the importance of teamwork, coordination and collaboration in fostering successful construction projects.

The center’s project team members include:

The U.S. Courthouse, San Diego is a Merit award winner in the category of projects Greater than $75 Million, making it one of only eight projects around the country to receive the Merit honor. Each year, the IDEAS2 awards honor National and Merit award winners in three categories, based on constructed value: projects less than $15 million; projects $15 million to $75 million; and projects greater than $75 million. Each project is judged on its use of structural steel from both an architectural and structural engineering perspective, with an emphasis on: creative solutions to project’s program requirements; applications of innovative design approaches in areas such as connections, gravity systems, lateral load resisting systems, fire protection and blast; aesthetic and visual impact of the project; innovative use of architecturally exposed structural steel (AESS); technical or architectural advances in the use of the steel; and the use of innovative design and construction methods.

The $300 million, 463,700-sq.-ft U.S. Courthouse in San Diego adds six courtrooms, chambers, and general office and support space as a freestanding tower adjacent to the existing Schwartz U.S. Courthouse. Located at the western edge of a growing downtown San Diego, the project integrates the new and existing buildings with gardens, plazas, a water feature and pedestrian paths that support downtown urban design goals. To balance program requirements and civic amenities, the 100,000-sq.-ft site creatively uses below-grade support and service areas, while the courthouse’s plaza-level footprint is a modest 20,000 sq. ft. This planning strategy allows the heart of the site to be developed as a significant new public plaza, serving as an active center of the federal building complex and an important new civic space.

“This unique structure couples challenging engineering with an architecturally complex scheme to provide a truly fascinating building,” commented Erin Criste, a staff engineer in AISC’s education department, and a judge in the competition.

The architectural massing of the new courthouse combines a slender 16-story tower that rises above a transparent and translucent building base. The tower is clad in wafer-like layers of terra cotta and glass composed in response to the program and orientation. The ultrathin massing supports sustainable design strategies to daylight the entire building. Adjacent to the lobby is a large jury assembly space, which opens to an outdoor jury assembly terrace with views to the plaza and gardens.

In juxtaposition to the rectilinear tower, the building lobby is an iconic elliptical volume carefully positioned to be visible from all approaches to the site. The lobby’s form serves to receive and redirect staff and visitors to the multiple courthouse destinations and is filled with filtered daylight from a south-facing two-story glass curtain wall. The lobby expresses its San Diego roots by paying homage to the locally beloved 1915 Balboa Park Botanical Building. Curved hollow structural sections (HSS) and exposed steel framing in this new structure mirror the lath-house design employed in the original.

At the tower floors, public circulation is oriented along the glazed east elevation offering exceptional views to the plaza, city and south bay. The two-courts-per-floor design eliminates traditional internal corridors and gives human scale to the procession from entry to courtroom. This activity is visible from the public plaza and, through the building façade, expresses a dynamic and accessible judicial process.

The palette of materials and “color” are inspired by the city itself. The warm off-whites, which turn golden at sunset, help set the Mediterranean stage that makes San Diego unique. To achieve this color, façade materials include painted structural steel, natural stone, terra cotta and concrete. Exposed steel (AESS) is expressed prominently in the architecture, including the lobby curtain wall and screen, as well as in site amenities such as the trellis along the main entrance ramp. Weathering steel plate edging the accessible path between the plaza and entrance lobby boldly complements the subdued colors of the building.

High seismicity, a narrow plan that contrasted with a significant overall height, requisite column-free jury assembly areas at Level 1 and blast and progressive collapse requirements all posed the primary structural challenges. These were met by working creatively with the design and construction team to develop a functional structural geometry that was validated using a performance-based design methodology to achieve a cost-effective seismic solution.

Concrete-filled metal deck supported by steel wide-flange beams and columns resist gravity loads. Open space requirements at the public level call for a relatively small number of columns and result in typical spans on the order of 45 ft. Quiet seating in the courtrooms demands stringent floor vibration criteria, which were satisfied by carefully analyzing selected applications of framing continuity in concert with progressive collapse requirements.

Security considerations required that no essential part of the building’s resistance to catastrophic blast loads encroach beyond the blast setback zone, yet urban design goals sought to bring the north and west building lines as close as possible to the property edge to maintain alignment with adjacent buildings. Double cantilevered girders at the northwest corner, for example, allow the building to project beyond the blast setback while protecting the lower portions of the building. An eccentrically braced frame (EBF) provides seismic stability and offsets drift problems created by courtroom floor-to-floor heights in excess of 22 ft that made moment frames impractical.

At 320 ft in height, the building exceeds the 240-ft maximum for an EBF. Although some dual systems using concrete and steel do not have building code height limitations, the construction manager advised that mixing major subcontracting trades would result in cost premiums. In addition, trial designs of various dual systems suggested that moment frames would not participate cost-effectively in the overall lateral system due to their flexibility relative to other stiff elements in the dual system. The owner approved innovative performance-based design criteria developed by the structural engineer, which demonstrated that a steel EBF was an effective seismic system, saving several million dollars.

The project benefited from early retention of the CM-at-risk, which is not always possible on publicly funded projects. The team took advantage of this to reduce overall construction time by working together to carefully coordinate building systems within the tight envelope demanded by the high-ceilinged spaces, as well as with continuous on-site coordination of shop drawings. This up-front work paid significant dividends in that the project was completed a month ahead of the completion date established before construction began.

Cost efficiency demanded different foundation systems under the tower and other subterranean areas, which can lead to unacceptable differential settlements. Introducing a joint around the tower to minimize adverse consequences would have reduced construction productivity as well as become an on-going maintenance problem. Using a detailed project schedule developed by the CM-at-risk, the structural engineer developed multi-stage structural models to investigate and discount differential settlement concerns thereby eliminating the need for a plaza-level joint.

The 12 IDEAS2 winners for 2014 were chosen from nearly 100 submissions received from architectural and engineering and other project team member firms throughout the U.S. Each submission is reviewed and award winners are selected by a nationally recognized panel of design and construction industry professionals.

The IDEAS2 award dates back more than 70 years to the earliest years of AISC’s existence. And about this year’s winning courthouse, Roger E. Ferch, P.E., president of AISC, said, “The entire U.S.  Courthouse, San Diego team has shown how structural steel can be used to create structures that combine beauty and practicality. The result is a structure that serves its city, state and country extremely well, while providing an example of what can be achieved when designing and constructing projects with steel.”

About the American Institute of Steel Construction

The American Institute of Steel Construction, headquartered in Chicago, is a not-for-profit technical institute and trade association established in 1921 to serve the structural steel design community and construction industry. AISC’s mission is to make structural steel the material of choice by being the leader in structural steel-related technical and market-building activities, including: specification and code development, research, education, technical assistance, quality certification, standardization, and market development. AISC has a long tradition of service to the steel construction industry of providing timely and reliable information.