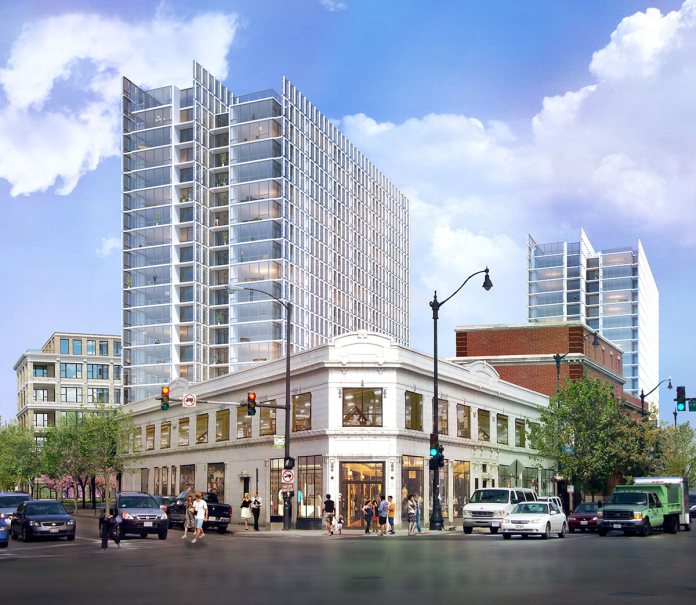 Co-developers Hines and McCaffery Interests have broken ground on the $350 million Lincoln Common, a mixed-use development at the former Children’s Memorial Hospital site.

“The Lincoln Common continues Lincoln Park’s longstanding legacy of community innovation, partnership and investment,” Mayor Rahm Emanuel said in a statement. “The final plan we are breaking ground on today not only supports the City’s affordable housing goals with more than 50 affordable units on-site and a major investment to support even more affordable housing across the city, but also reflects Alderman Smith’s request to the developer for additional passive open space in the Lincoln Park community.”

Skidmore Owings (SOM) and Merrill and Antunovich Associates collaborated on the project, which includes two new glass residential buildings with 538 apartments and 40 for-sale condominiums. It will also include 94,000 sq. ft. of dining and retail space, 47,000 sq. ft. of boutique office space and 67,000 sq. ft. of open public park space. Lincoln Common has been in the works since McCaffery was selected as the winning bid to redevelop the six-acre site back in 2011, Curbed Chicago reports.

The site’s 1930s brick-clad boiler house and laundry building plus an older terracotta structure at the southwest corner of Lincoln and Halsted will be preserved for possible adaptive reuse. The second terracotta building at the southwest corner of the intersection, however, was deemed beyond saving though it could be rebuilt in a similar architectural style. Meanwhile, across the street at 700 W. Fullerton Parkway, the site’s seven-story assisted living structure replacing the similarly-sized Nellie Black building has already been cleared to begin construction.