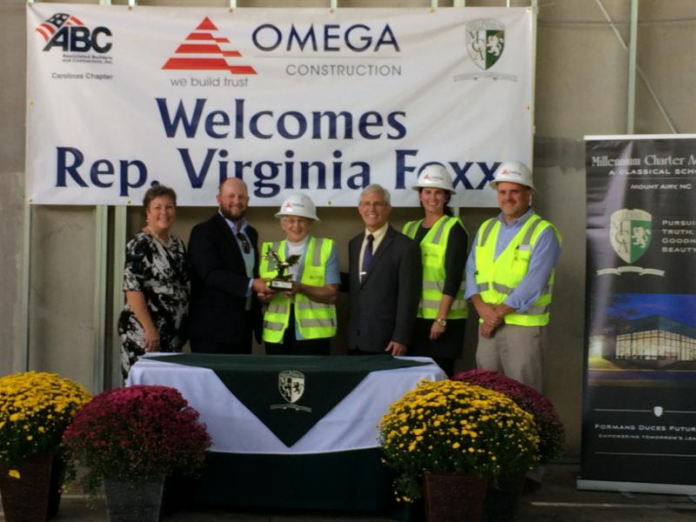 The Associated Builders and Contractors (ABC) of the Carolinas and member company Omega Construction has welcomed Rep. Virginia Foxx to visit Millennium Charter Academy in Mount Airy. The contractor is currently in the second and third phase of constructing the K-12 charter school in Surry County, ABC Carolinas reports.

The Sept. 22 visit occurred as ABC recognized Foxx with the “Merit Shop Champion” Eagle Award, given to legislators with an 80 percent or better voting record based on ABC key issues during the previous session of Congress.

“The Carolinas are fortunate to be represented by a number of members of Congress who are true champions of the merit shop philosophy and free enterprise system,” said ABC Carolinas government affairs director Chris Bullard. “We are extremely thankful for Congresswoman Foxx’s leadership. Her commitment to our industry and it’s workforce development play a critical role in our member companies success across the state.”

The first portion of the school was constructed in 2000, director of development Lu Anne Browne has been reported as saying in the Mt. Airy News. Two additions later, the school has its current facility.

The latest addition will cost about $6.9 million.