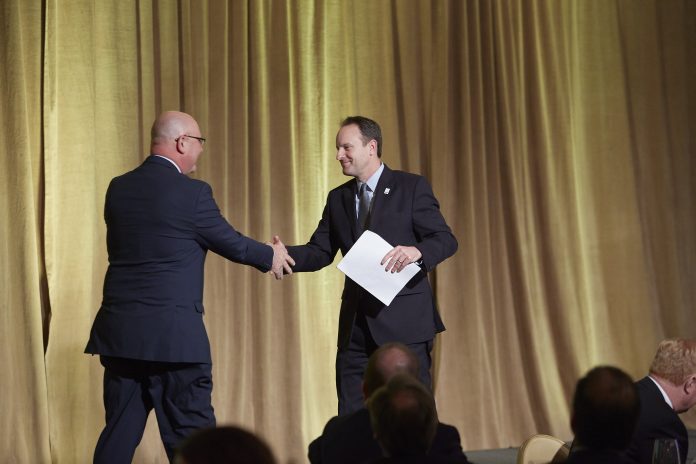 Representing the interests of the Chicago office building industry since 1902, members of the Building Owners and Managers Association of Chicago (BOMA/Chicago) include 236 commercial office, institutional and public buildings, and 162 affiliate companies providing commercial building services.

BOMA/Chicago’s 114-year history reaches back to the development of the city and the pioneering initiatives at its heart. President Bob Quast says the group’s origins began with the unionizing of the janitors who maintained rental flats at the time, and the informal gathering of building owners to discuss common issues. “Together the group entered into a negotiation with the labor union and that was the birth of BOMA.”

The group grew and evolved over time but its role as an advocate and its strong ties to labor have remained. “We have a labor committee that negotiates agreements with key members of our building teams – the security, operating engineers and janitors’ unions.”

Quast says each BOMA local tends to take on different functions and roles, depending on its member interests. BOMA/Chicago, he says, is the only group in the country active in negotiating labor agreements.

“In a city like Chicago, besides labor, we also maintain strong relationships with the city, emergency management and a variety of federal groups.”

To support this, BOMA/Chicago’s committees are made up of leadership representing diverse organizations. “We want to be aware of and get ahead of legislation and ordinances that may impact our industry. By being involved early, we can work out ways to implement change in a practical way that makes sense for everyone.”

Another partner group equally interested in the impact of changes is the contractors who build out tenant spaces and manage members’ building repairs.

“The city of Chicago is the only major metropolitan area with its own building code,” he said. “We have been working with the city to encourage implementation of the International Building Code (IBC), and with our contractor partners on technology and improved communication, that will facilitate the relationship between them, our space planners, tenants and building owners.”

Another area where BOMA/Chicago works closely with government at all levels is taxation, which is always a concern, he says, as the city and state work to balance budgets and BOMA/Chicago works to maintain its members’ competitive advantage both regionally and nationally. “It’s important to keep at the forefront that tax increases impact the bottom line and those increases are transferred directly to tenants as part of their pro rata allocation of building expenses.”

BOMA/Chicago supports members as well with several benchmarking tools including an Experience Exchange Report that surveys buildings across the country to support comparisons of income and operating expenses, including energy costs. He says BOMA is a close-knit but competitive industry and that the information sharing is mutually beneficial.

“Under the previous federal administration there was a big push for sustainability,” he said. “Whether that continues or not, from an operational standpoint and a tenant interest view, it makes sense for us to continue to monitor and improve in this area.”

BOMA/Chicago members recently gathered at its annual membership meeting where advocacy and education efforts of various committees were highlighted. The event was also an opportunity to thank outgoing president T. J. Brookover, and for Quast to officially take over the gavel.

“We also highlighted the work of our members to benefit the community. Our member buildings collected more than 127,000 lbs of food for the Greater Chicago Food Depository and hosted 109 blood drives in 2016.”

BOMA/Chicago “has played a vital role in advocating on behalf of our members for over a century and continues to be a leader in drafting new building codes, advancing fire and life safety measures, negotiating mutually beneficial labor agreements and enhancing energy efficiency and sustainability practices,” the organization’s website says.