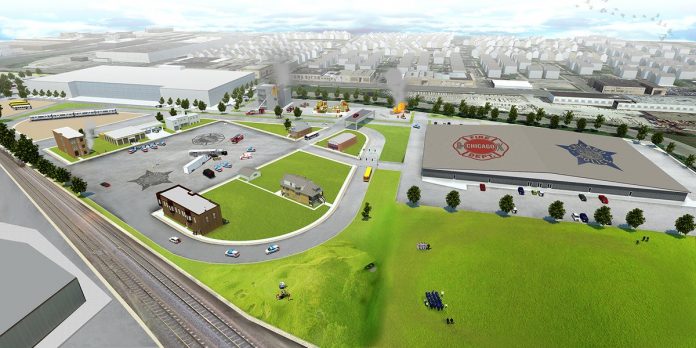 The City of Chicago has arranged to purchase 30.4 acres of land in West Garfield Park for a new $95 million Public Safety Training Academy.

Mayor Rahm Emanuel on July 30 announced the planned purchase of the land at 4301 W. Chicago Ave. The purchase is expected to be introduced to the city council later this year. The new facility will offer specialized training for first responders, improve interagency collaboration in emergency response, and emphasize hands-on tactical training in real-world situations.

Construction of the new facility will utilize funds from the sale of city-owned land at 1685 N. Throop St., the mayor’s news release said.

Following a competitive bidding process, the city has reached a tentative agreement to sell the 18-acre Department of Fleet and Facilities management location to local developer Sterling Bay for $104.7 million, or $133.53 per sq. ft. The site was marketed on behalf of the city by Cushman & Wakefield. Closing is expected to occur later this year. (Sterling Bay is purchasing other industrial land in the area as part of an ambitious redevelopment project.)

At least $20 million of the sale of Throop St. property will go towards the training academy, which will pay for the purchase of the land and get work started. The city will work with the Chicago Infrastructure Trust to select a developer to design, build and finance the project.

The project is one of several where the city government is working with private developers on partnership projects. In February, the Mayor announced the 2FM headquarters would move from West Town to Wentworth Ave. and 69th St. in Englewood, along with 200 jobs. The new facility will be funded in part by proceeds from the sale of the site on N. Throop.

Additionally, a new branch library on the Near West Side and new fire station on the Near North Side are being planned through public-private partnerships with local developers, the Mayor’s office said in a news release.

“Public safety officials need the best tools, technology and training to serve our city and its residents, and this facility will provide a place for them to prepare and practice for everyday encounters,” said Emanuel. “This is not only a significant investment in the West Garfield Park and Englewood neighborhoods, but its proof of our continuing commitment to expand city services to more communities.”

The city released renderings of the new facility, showing that the site will include indoor and outdoor training spaces that both extend the current training capabilities of the Police and Fire Departments as well as offer more joint-training opportunities.