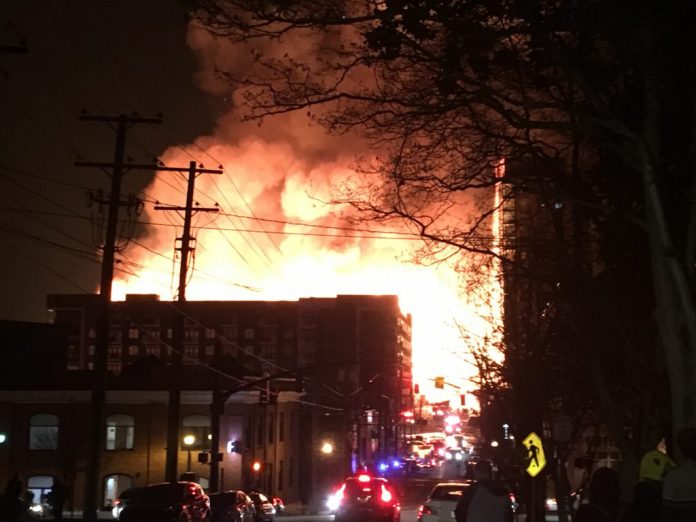 The developer of a $51 million apartment project in downtown Raleigh that went up in flames in a five-alarm construction fire says the structure will be rebuilt.

The Metropolitan, owned by Chicago-based Banner Apartments, was under construction (about 40 percent complete) at the former Greyhound bus terminal, which the developer had purchased (with two adjacent properties) totalling about 2 acres. The company paid $4.8 million for the 1.72-acre bus terminal and $1.385 million for two other adjacent properties totaling .27 acres, the Raleigh News & Observer has reported.

Banner Development president William Henry told the newspaper he knew the situation could have been much worse.

“There was no loss of life, and that’s what we’ve got to be grateful for,” he said. “There are plenty of sticks and bricks to rebuild with, and that’s our intended goal.”

Henry said  the company will wait for fire investigators to complete their work, and then will assess the damage and the structural integrity of what remains.

“We’ll see what needs to be taken out and what we can keep,” Henry said. It could be that only foundations remain, he added, but construction can restart from those.

Raleigh Fire Chief John McGrath said the project was at the stage where it lacked fire prevention systems such as sprinklers and fire resistant walls, and burned quickly. However, he said it was compliant with what fire codes required at the stage of construction and had been inspected as recently a few days before the fire.