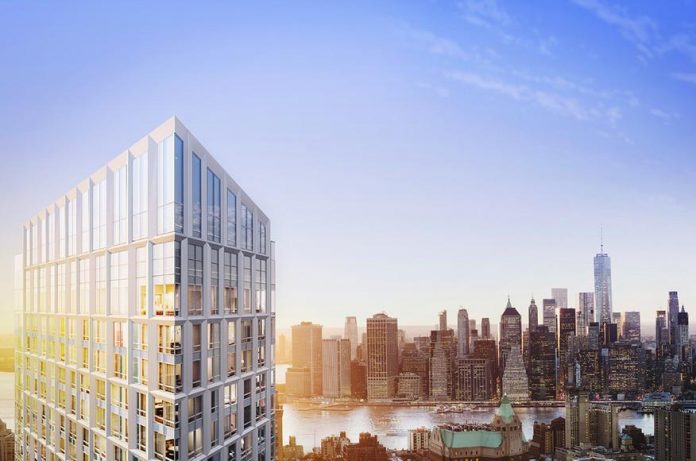 If approved, the 720-ft. skyscraper that will become Brooklyn’s second tallest building next to the 1,000-ft.-tall tower designed by SHoP Architects.

Brooklyn Point is set to be built by New York developer Extell at 138 Willoughby St. in Downtown Brooklyn, two blocks away from Fort Greene Park, one of the borough’s few green spaces. The location is then to be renamed as 1 City Point as the tower’s construction is joining Extell’s City Point Tower One.

Based on the renderings, the tower will be a light-colored structure with stacked frames of glazed walls. It is expected to house a total of 458 apartments that range from studios to three-bedroom units featuring custom interior, with prices ranging from $840,000 to $1,000,000. Although the prices are steep, they are relatively lower than Extell’s One57.

“The custom curtain wall’s double-height frames accentuate the verticality of the building and the faceted planes add depth and texture to the exterior,” KPF says in a statement published in Architect Magazine.

Only a few details have been released about Brooklyn Point’s amenities. KPF says that the project includes over 40,000 sq. ft. of services and lifestyle amenities with “abundant entertainment areas” and “unrivaled outdoor amenities.”

KPF is known for designing skyscrapers such as their recent project, the 555-meter-tall Lotte World Tower, South Korea’s tallest building. The firm also designed One Vanderbilt in New York, which is replacing 432 Park as NYC’s second tallest skyscraper.