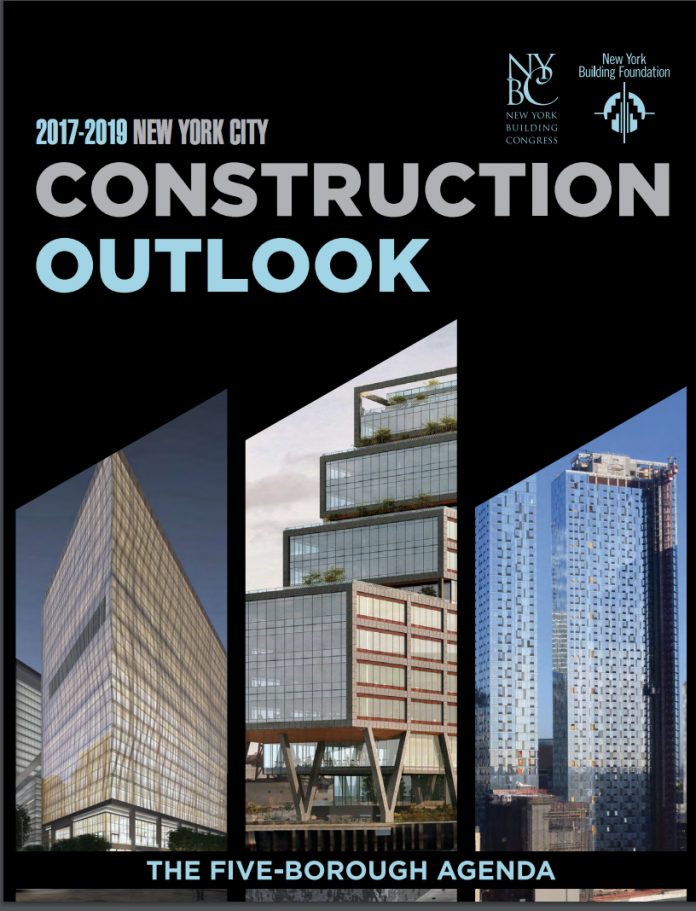 The Building Congress forecasts $45.3 billion in NYC construction spending in 2017. While this would represent a 13 percent decline from 2016, when spending reached $52.2 billion, it would still be the second highest total in actual dollars in city history. It also would rank second, behind 2016, after adjusting for inflation since at least 1995. The Building Congress anticipates a quick return to last year’s heights with $52.5 billion in construction spending projected in 2018, followed by $50.1 billion in 2019.

“Between 2015 and 2016, New York City produced an astounding 72,000 new units of housing, which was easily the most productive two-year period for residential construction in more than two decades,” Scissura said. “While the pace of new housing construction will cool in the coming years, our 2018 and 2019 projections remain strong from a historical perspective.”

Government
Government spending on public works, which includes mass transit, roads, bridges, and other essential infrastructure, is expected to reach $16.9 billion in 2017, a 16 percent increase from 2016 when spending reached $14.6 billion. Spending in this sector is anticipated to increase further to $18.8 billion in 2018 and $19.1 billion in 2019.

The organization foresees construction spending by the Metropolitan Transportation Authority (MTA) to increase to $6.5 billion this year from $5 billion in 2016. MTA spending is anticipated to drop to $6 billion in 2018 and $4.7 billion in 2019.

The remaining $1.1 billion in 2017 public works spending will be undertaken by agencies on the State and Federal levels, including DASNY, the State Department of Transportation and the U.S. Army Corps of Engineers.

“Government infrastructure spending is back on the rise and not a moment too soon,” Scissura said. “After years of declining investment, our transportation and infrastructure networks are currently straining to keep pace with the additional demands imposed by a growing economy and robust private investment.”

NYBC prepared the construction outlook report with the assistance of Urbanomics, an economic consulting firm. It incorporates updated analysis from the U.S. Census Bureau, Dodge Data and Analytics, the New York State Department of Labor, public sector capital budgets and the Real Estate Board of New York. The New York Building Foundation, which is the philanthropic arm of the New York Building Congress, co-sponsored the report.