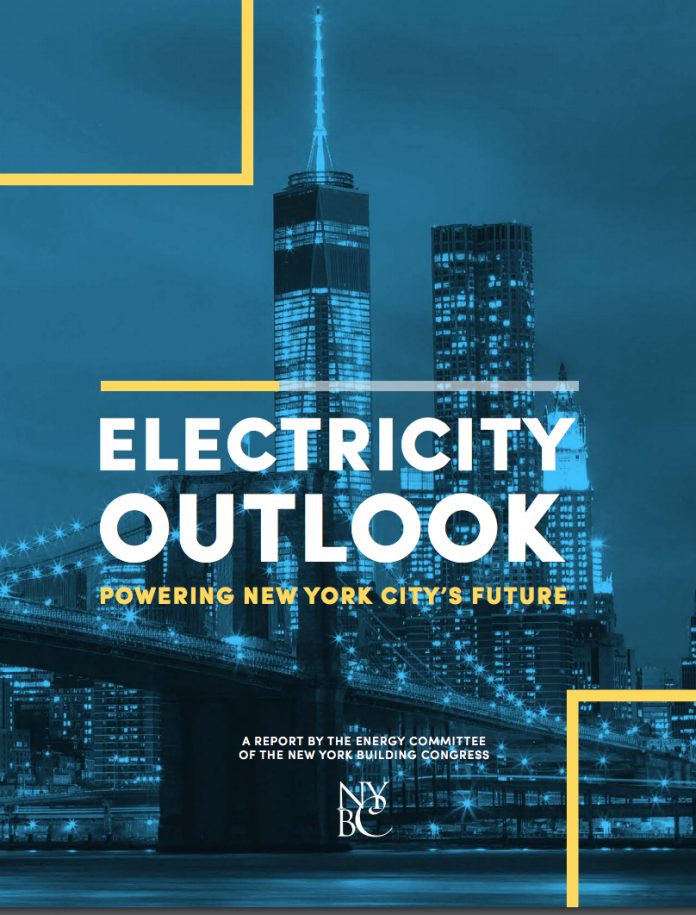 With New York City’s largest source of electricity generation marked for extinction amid a projected increase in energy demand, New York must add significant new electrical transmission and natural gas pipeline capacity, while also encouraging greater use of conservation over the next decade, according to a New York Building Congress (NYBC) report.

The report, Electricity Outlook: Powering New York City’s Future, warns that while the city’s electricity supply is adequate to meet present demand from homes, businesses, and public facilities throughout the five boroughs, more needs to be done to keep pace with anticipated economic and population growth and in advance of the planned closure of Indian Point Energy Center’s two nuclear power plants by 2021.

“With preparations to shut down Indian Point shifting into high gear, the time for action is now,” said NYBC president and CEO Carlo A. Scissura. “New York City and State officials, along with their partners in the private sector, must work together on a comprehensive plan to reliably generate and transmit the power necessary to meet the demands of the city’s growing economy and population.”

While substantial energy infrastructure investments have been made in recent years, NYC is facing significant risks to its electricity supply outlook, led by the anticipated closure of Indian Point, which in 2016 accounted for 25 percent – 2,069 MW – of the local energy supply to the entire Lower Hudson Valley, including NYC.

In addition, the report notes that more than 50 percent, or approximately 5,500 MW, of in-city generation is produced by plants that are more than 40 years old, yet there are no current plans for new generation plants anywhere in the five boroughs.

“Absent additional in-city generation, it is essential that New York make substantial new investments in transmission capacity,” said NYBC energy committee co-chair John J. Gilbert III, who is executive vice-president/COO at Rudin Management. “Such a boost in capacity will alleviate congestion in existing sources of downstate transmission, allow the city to benefit from ongoing investments in renewables north of its borders, and jump-start the process of decommissioning the city’s aging fleet of generators.”

NYBC notes that two important proposals for transmission investment into NYC, if authorized, could supply 2,000 MW of electricity directly to the city by or before 2027.

The Champlain Hudson Power Express is a 330-mile HVDC submerged cable project below Lake Champlain and the Hudson River that could deliver 1,000 MW of renewable energy from Québec to Astoria, Queens. This project has been fully permitted and is currently finalizing engineering details. Construction could start in 2017 and the transmission line could be in service by late 2021.

The proposed Empire State Connector, a 260-mile submerged cable project below the Erie Canal and the Hudson River and terminating in either Brooklyn or the Bronx, would deliver 1,000 MW from renewable sources. This proposal is in active planning with final permitting still in progress.

Ample supplies of natural gas will also be critical as almost all in-city electricity generation comes from natural gas-burning plants. With natural gas demand projected to increase annually throughout the region, new pipeline capacity will be needed prior to 2027.

The need for additional supply is made clear by the most recent forecast from the New York Independent System Operator (NYISO), which monitors the reliability of the state’s power system and coordinates the daily operations to distribute electricity supply. NYISO forecasts that peak summer demand will reach 12,788 MW in NYC in 2027, an increase of 1,798 MW from peak 2016 demand. While NYISO estimates that 726 MW of that increase can be absorbed by enhanced energy efficiency measures, such as improved energy appliances, increased use of solar photovoltaics and other “behind-the-meter” measures, the remaining supply gap will require additional sources of capacity.

Despite the pressures imposed by summers that have become increasingly hotter year over year, the report notes that NYC has been able to reliably meet the electricity demands of its growing economy, population, and built environment in recent years. During the first half of this decade, the city added 1,205 MW in generation and 660 MW in transmission capacity. Another 83 MW have been added via solar energy. Natural gas supplies have also increased thanks to new pipelines and separate investments to boost capacity on existing lines.

In addition, the introduction of more energy efficient products and the adoption of conservation measures has actually led to a slight decline in annual electricity consumption across the city since 2011.

“New York City has come a long way. It was not that long ago when every heat wave brought with it the threat of a major power outage,” Scissura said in a statement. “This is no time for complacency, however. All stakeholders – government, utilities, and commercial and residential consumers – must do their part if New York City is to remain the most reliable city in the United States when it comes to keeping the lights on.”

The Building Congress issued the following recommendations in its report:

“The bottom line is that meeting New York City’s growing demand for electricity over the next decade will require a multi-pronged strategy incorporating energy efficiency and conservation, increased transmission and pipeline capacity, as well as new storage and supergrid technologies,” Scissura said.