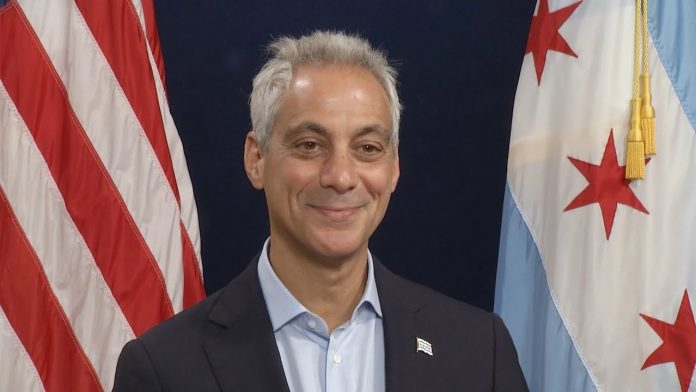 A floating ecology classroom, a boating raceway, and an audiovisual performance space are among the 27 visionary ideas for Chicago’s riverfront in the River Edge Ideas Lab exhibit unveiled Sept. 14 by Chicago Mayor Rahm Emanuel, the Metropolitan Planning Council (MPC), nine participating architects and other partners and funders.

Part of the Chicago Architecture Biennial, the River Edge Ideas Lab features development concepts from world-class architectural firms for three locations: the Civic Opera House waterfront; beneath the Congress Parkway bridge; and below the St. Charles Air Line Bridge. Each location represents a unique challenge to the Riverwalk’s potential 1.8-mile extension from the main branch to Ping Tom Park in Chinatown, the mayor’s office says in a news release.

“With the success of our Riverwalk and the four new boathouses we’ve built throughout the city, we’ve begun to transform our river into the next recreational frontier, but there is more work to be done,” Emanuel said in a statement. “This bold initiative will help us imagine new possibilities to further develop our riverfront in ways that will benefit current and future generations of Chicagoans.”

The firms’ design concepts are on display at Expo 72, 72 E. Randolph St., through Jan. 8, 2018. The public is invited to provide feedback on each design at the exhibit or online at www.ChiRiverLab.com.

“Our rivers wind their way through so many Chicago neighborhoods,” said MarySue Barrett, executive director of MPC, the city’s collaborative partner on the exhibit. “That allows them to create a jolt in investment citywide in residential and commercial growth that is so needed.”

The River Edge Ideas Lab is part of Mayor Emanuel’s ongoing effort to turn the Chicago River into the City’s next recreational frontier. Currently, 17 miles of river trail are in place or under construction, with plans for about seven more miles being finalized.

“We want Chicagoans to be amazed by the creativity and possibilities that will provide for a truly engaging and harmonious riverwalk experience,” said David L. Reifman, commissioner of the Chicago Department of Planning and Development (DPD). “The River Edge Ideas Lab will help create a framework for Riverwalk expansion while getting people excited about the possibilities at the same time.”

DPD will incorporate public feedback from the River Edge Ideas Lab into updated River Design Guidelines in 2018; the guidelines were initially adopted in 1999 and last amended in 2005. The updated 2018 guidelines will offer best practices to create a continuous pedestrian and bicycle path with accessible connections and open spaces incorporating integrated landscaping, artwork and lighting.

“Humans are impacted by the built environment on a multi-sensory level in a process by which minds, bodies, environments, and cultures interact with each other over the course of generations, said Kim Coventry, executive director of the Driehaus Foundation, one of the exhibit’s sponsors. “Thoughtful design enhances our lives and benefits everyone.”

In addition to the exhibit on display at Expo 72, a traveling version of the River Edge exhibit opened on Sept. 18 at the Bridgehouse Museum at Michigan Ave. and Wacker Dr. The traveling version will move to a new location every two weeks. Special gallery talks and panel discussions involving architects and planners are also scheduled during the four-month exhibition.

Visualization support for the Ideas Lab was provided by WSP and Autodesk, including the development of a digital model allowing viewers to interact with the 27 visions in an immersive experience.