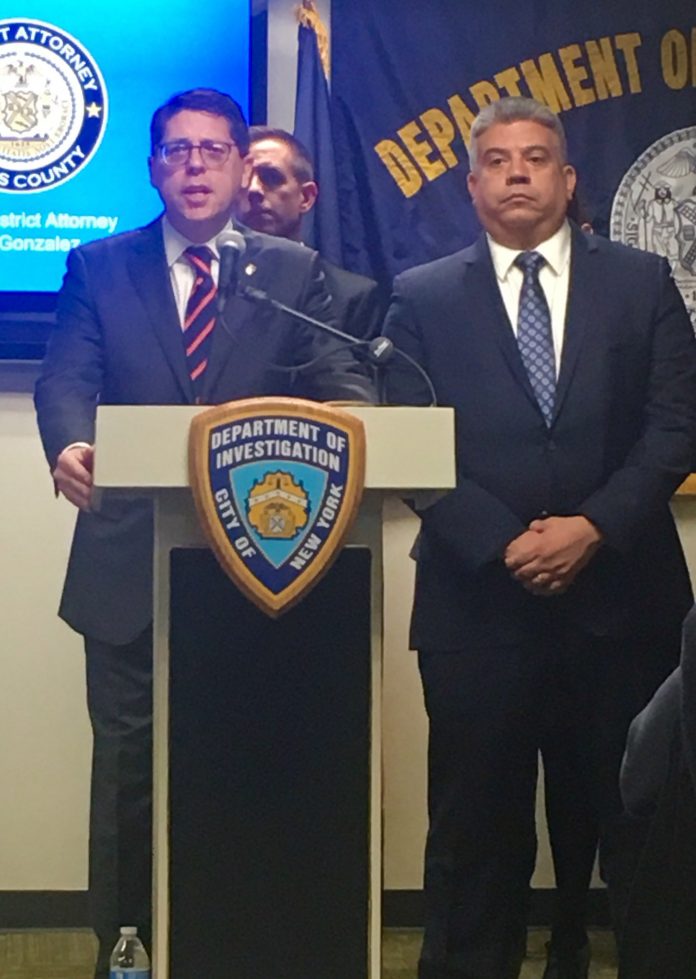 Others charged on Oct. 25 included property managers and developers, a private asbestos inspector and a plumber.

In a two-year probe conducted by the DOI, authorities alleged that city building inspectors Hiram Beza and Dean Mulzac were receiving pay-offs in the form of cash or gifts. The two allegedly issued rubber stamp paperwork for inspections they never performed from six property managers who were also charged.

Investigations revealed that Beza accepted payoffs in the form of home renovations from contractors whose projects he illegally approved. In one case, a contractor built him a new kitchen to pass inspection. Mulzac, on the other hand, took a pair of earrings for his girlfriend worth $100 from a property owner who owned a jewelry store, the acting DA asserted.

“These investigations are a testament to our continuing commitment to keep people safe as developers too often are willing to take shortcuts at the risk of public safety to rapidly get their properties to market,” said Gonzalez.

He also said that he will continue working with the DOI to ensure that nobody “sells the safety of the people of Brooklyn” for their personal benefit.

Beza and Mulzac were both charged with third degree Bribe receiving classified as a class D felony, Official Misconduct, and a class A misdemeanor. Beza was also charged with Offering a False Instrument for Filing in the First Degree which is a class E felony.

Property managers and developers charged in connection with the scheme said to have been ran by Mulzac and Beza are: Ruben Badalov of Queens, Yoel Blum of Spring Valley, Zev Chaskelson of Brooklyn, Yakhiel Firgiyev of Queens, Matan Hacohen of Bellerose, and Amritpal Sandhu of Cedarhurst.

Badalov, Blum, Chaskelson, Hacohen and Sandhu were charged with third degree Bribery classified as a class D felony. Chaskelson, Firgiyev and Hacohen were also charged with Giving Unlawful Gratuities which is a class A Misdemeanor. Additionally, Firgiyev was charged with Reward Official Misconduct  in the second degree, a class E felony.