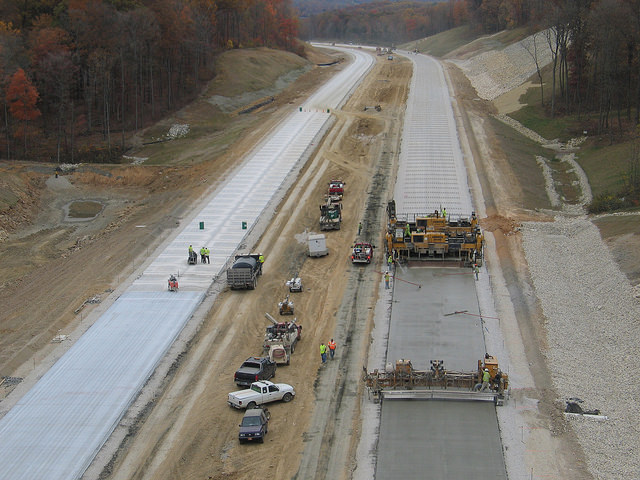 Fitch Ratings says it has has downgraded the Indiana Finance Authority’s (IFA) private activity bonds (PABs) issued on behalf of I-69 Development Partners LLC (I-69 DP) for the I-69 Section 5 project to ‘B-‘ from ‘B’. The bonds remain on Rating Watch Negative.

The downgrade reflects growing uncertainty and a more limited margin of safety for the project as result of a failure to execute the terms of a Memorandum of Understanding (MOU) reached between project parties earlier this year which appeared to settle time and cost disputes, Fitch says in its announcement.

“The lack of a global settlement heightens the risk to the project failing to meet the current longstop date of Oct. 31, 2017. In addition, it is unclear where additional sources of funding will come from, without a contribution from Grupo Isolux Corsan, SA (Isolux, rated ‘RD’), the parent company of Isolux Corsan LLC (the design build contractor) to meet the requirements of a new global settlement should one be reached between the pertinent parties. Barring movement towards a new MOU with funding sources firmly in place, a downgrade to ‘CCC’ is likely in the next 60-90 days.”

The MOU, signed on Feb. 13, 2017, addressed key issues such as increased costs, existing relief claims and outstanding notices of default, along with extending the substantial completion and longstop dates and was considered a positive development for the project. The MOU also required I-69 DP and Isolux to contribute $23.3 million and $52 million (includes funds to repay the letter of credit) to the project, respectively, and IFA would make an additional $28.2 million milestone payment. However, the deterioration in the restructuring of Isolux rendered the MOU unsuccessful as Isolux is not able to meet the terms of its obligations under the agreement, specifically the $52 million equity infusion. Negotiations between I-69 DP and the IFA are ongoing, as both parties work towards a global solution and successfully completing the project.

The outlook on the bonds remains at Rating Watch Negative. Resolution of the Negative Watch depends on a negotiated settlement between all parties, with updated documentation and bondholder authorization that resolves outstanding disputes surrounding liquidity, timing and scope. Notably, updated documentation would need to resolve construction delays and equity infusions, most importantly revising the substantial completion date and extending the longstop date.

Construction Delays, Weak Contractor (Completion Risk – Weaker)
The project is not expected to be completed by the current longstop date of Oct. 31, 2017. Substantial completion was originally projected for Oct. 31, 2016, but the project is only approximately 56% complete. Without the execution of a global settlement that extends the longstop date, the project will not meet this deadline, which is a termination event under the documents. Additionally, the continued deterioration in credit quality of Isolux has strained the project.

Straightforward Operations, Handback Risk Well Managed (Cost Risk – Midrange)
Once construction is complete, the project company will self-perform most operation and maintenance (O&M) activities, exposing it to O&M and lifecycle cost risk over the project life. O&M works are generally considered relatively straightforward given the limited scope of the project. The major maintenance reserve account (MMRA) and handback requirements reserve account (HBRA) are both designed such that major works should be anticipated from a funding perspective several years ahead of incurrence. The project’s cost profile is significantly backended with a large part of lifecycle works anticipated during the handback period, but since final debt maturity is five years prior to concession maturity, bondholders are not exposed to handback risk.

Strong Counterparty, Significant Delays (Revenue Risk – Stronger)
Milestone and availability payments during the project are made by Indiana Finance Authority (IFA, or the grantor), whose obligation has been rated at ‘AA’/Outlook Stable. While the IFA is a strong counterparty, poor relations between all project parties have resulted in delays and cost deductions. IFA and the Developer continue to be committed to successfully completing the project and working towards a solution.