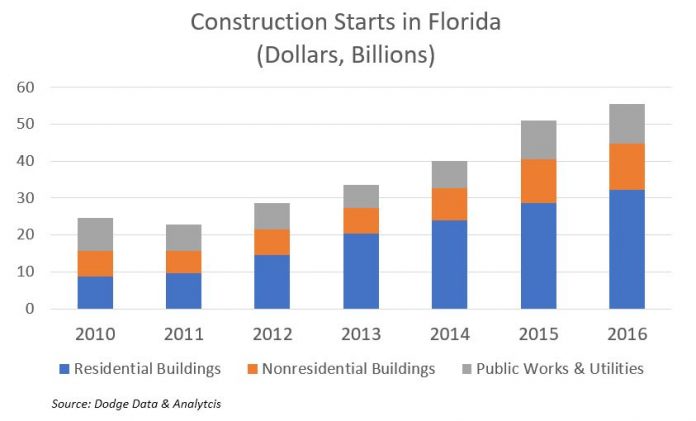 BEDFORD, MA — The one-two punch of Hurricanes Harvey and Irma have wreaked havoc across the Gulf Coast over the past month. Once all the damage is tallied, Harvey is likely to be the costliest storm to impact the U.S. Irma’s path through the Keys, then up the west coast of Florida, took it away from a direct hit to Miami. And while the storm itself was as wide as the entire state, the turn to the west likely lowered the severity of damage in terms of total dollars. Estimates from Moody’s Analytics places the total cost of Irma in the range of $60-90 billion – a significant event that will certainly impact the region’s economy, but still below Harvey’s expected destructive toll of over $100 billion.

In the initial aftermath of the storm, over 60 per cent of Florida was without power. With estimates ranging in weeks for full restoration, many businesses will be closed resulting in a short-term loss in income, higher unemployment insurance claims, and an overall slowdown in economic output. The combined impacts of Harvey and Irma are likely to have a negative effect on both third and fourth quarter employment and GDP data.

Prior to Irma, 2017 had been shaping up as another strong year for starts in Florida. Through the first seven months of the year, nonresidential building starts had risen 32 per cent from the same period of 2016, while public works and utilities starts were 21% higher. Residential building starts were up a more modest 1 per cent year-to-date through July. Based on historical data through the second quarter of 2017, Dodge Data & Analytics had predicted Florida’s total construction starts would rise 9 per cent for the full year to $60.3 billion.

That forecast is now under review as restoration and repair efforts begin. Water and sewer facilities, as well as roads, will be the initial driver of reconstruction growth in the coming months. An initial round of federal disaster relief should be quick to materialize, much like the $15 billion approved for Harvey in early September.

Residential construction starts in Florida will likely slow over the next few months as the focus shifts towards cleanup and damage assessment. Once estimates are completed, rebuilding will still likely be slow as individuals wait for insurance checks and federal relief to appear. Over time, however, residential starts in the state will rise above the norm, particularly in the Keys where reports suggest that 25 per cent of homes were completely destroyed and far more were badly damaged.

As with the effects of Harvey on Houston’s building outlook, once cleanup is completed, nonresidential building reconstruction will likely focus on institutional structures such as schools, healthcare buildings, and public safety facilities in Florida. Unlike Houston though, the rebuilding of commercial structures will likely not be far behind as real estate fundamentals for warehouse, office, and hotel buildings are generally healthier than Houston’s.