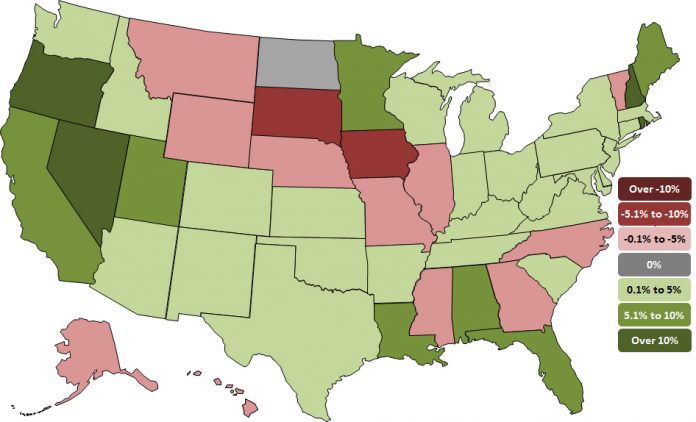 Illinois continued to lose construction jobs in July, with a loss of 1,800, bringing the overall number employed to 213,400, according to an analysis by the Associated General Contractors of America (AGCA) of Labor Department data. Overall, for the year between July 2016 an 2016, the state lost 4,300 jobs — or 2 percent of the construction payroll, ranking Illinois 44th in the nation.

While the news in the past month isn’t good, the relative ranking of Illinois ranked 10 states higher, at 34th nation-wide, compared to the year-to-date data.

Overall, 36 states and the District of Columbia added construction jobs between July 2016 and July 2017, yet only half the states added construction jobs between June and July amid declining public-sector investments in infrastructure and other construction projects, the AGCA reported. Association officials said firms in parts of the country that build infrastructure projects are seeing less demand for their services amid overall declines in public-sector spending.

“Despite growing private-sector demand, it appears that construction employment in some parts of the country is being brought down by declining public-sector investments,” said AGCA chief economist Ken Simonson. “Some of these declines will be offset thanks to recently enacted state infrastructure funding increases, but stagnant federal investments are not helping.”

View the state employment data by rank and state.