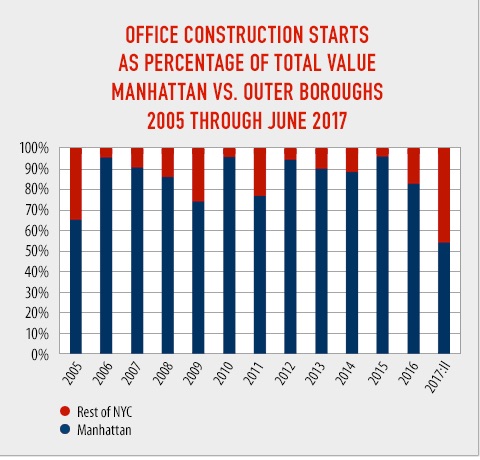 New York City is in the midst of its biggest office construction building boom in three decades, according to a New York Building Congress (NYBC) analysis of multiple data sources.

The NYBC also anticipates the completion of 7.5 million additional sq. ft. within four major office projects – 1 Vanderbilt, 50 Hudson Yards, The Spiral at Hudson Boulevard and the office portion of the Moynihan Train Hall – between 2020 and 2022.

That estimate could quickly rise if projects such as 2 World Trade Center, 2 Manhattan West and 3 Hudson Boulevard move ahead. These projects, which would create another five million sq. ft. combined, have been fully designed and have all the necessary approvals to proceed as soon as an anchor tenant is signed.

The boom isn’t limited to Manhattan. Some of the largest outer borough office projects in decades are currently under construction as well, including The JACX, Tishman Speyer’s 1.2 million sq. ft. development in the Long Island City section of Queens, and Dock 72, a 675,000-sq, ft, office building being co-developed by Rudin Management and Boston Properties at the Brooklyn Navy Yard.

In fact, according to a Cushman & Wakefield analysis, a total of 6.9 million sq. ft. of new office space is currently under construction or in the planning stages in Brooklyn and another 3.6 million sq. ft. is in the development pipeline in Long Island City. Of that 10.5 million square feet, 8.5 million sq. ft. could be ready for occupancy by 2021. Source: Real Estate Board of New York and Urbanomics

In what could be a sign of even further momentum outside of Manhattan’s traditional office center, the other four boroughs accounted for 46 percent of all office construction starts by value in the first half of 2017, compared to just 17 percent in all of 2016 and less than four percent overall in 2015, according to Dodge Data and Analytics.

“Not since the Citigroup Building in Long Island City and MetroTech Center in Downtown Brooklyn were completed have we seen so much office construction in the boroughs outside Manhattan,” NYBC president and CEO Carlo A. Scissura said in a statement. “And this time the storyline is different. Rather than looking to the outer boroughs as a cheap alternative for a number of back-office operations, developers want to be there because that’s where the creative workforce wants to be.”

“The most exciting thing is what this new construction means for New York City over the long run,” Scissura said. “Our continued economic growth hinges on our ability to attract new industries and provide emerging companies with the dynamic types of spaces they need to attract talent and expand within the city’s limits. That’s exactly what is happening today in Long Island City and in multiple Brooklyn neighborhoods.”

According to a NYBC analysis of Dodge Data and Analytics, office construction projects with a total combined value of $1.4 billion were initiated in New York City during the first half of 2017, which is roughly comparable to the average for most recent years. A total of $1.9 billion in new projects (both ground-up construction and alterations to existing buildings) was commenced in the first half of 2016. Manhattan office starts reached $1.3 billion in the first six months of 2014, and $1 billion in 2013.

The one outlier was the first half of 2015, which witnessed $5.8 billion in new office projects, thanks in large part to the start of construction on multiple office towers in Hudson Yards and Manhattan West on the far West Side.

The brokerage firm CBRE estimates that the vacancy rate in Manhattan at the end of June was 8.1 percent while availability (defined as space being actively marketed for occupancy within 12 months) was at 12 percent. Both percentages are up slightly from the same period in 2016. Average asking rents in Manhattan have remained relatively steady over the past 12 months.

Based on leasing data from the first six months of the year, the NYBC estimates that a total of 27.2 million sq. ft. of office space will be leased in 2017, up from 22.8 million sq. ft. in 2016 and slightly above the previous five-year average of 25.7 million.

“The ongoing office construction boom is in large part a function of New York City’s ability to attract the world’s most successful companies and creative workers,”Scissura said. “With so much new office space still in the pipeline and with the East Midtown rezoning finally approved, we will need to continue the positive trend in overall office employment. That is why the Building Congress is in such strong support of Mayor de Blasio’s program to create 100,000 new jobs in such growth industries as technology, cybersecurity, life sciences and health care.”