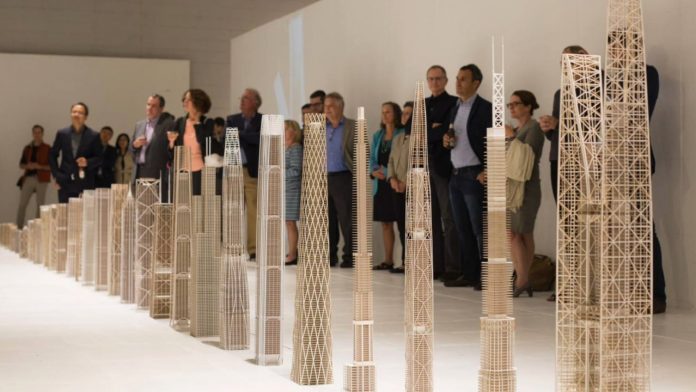 Chicago Mayor Rahm Emanuel says that more than 550,000 residents and visitors from the U.S. and around the world took part in the 2017 Chicago Architecture Biennial, which closed Sunday, Jan. 7. The 2017 edition of this global event featured 140 architects and designers, from 20 countries, selected by the artistic directors Sharon Johnston and Mark Lee of the LA-based firm Johnston Marklee.

“The second Chicago Architecture Biennial reinforced Chicago’s reputation as the vanguard of architectural, art and design innovation on the national and international stage,” Emanuel said. “The City of Chicago is naturally suited to host an architectural event of this scale, and I want to thank all of the architects, organizers, and residents who made this such a tremendous cultural, educational and economic success for our city.”

The 2017 Biennial, titled Make New History, was a free, citywide event featuring many partners, including the Chicago Department of Cultural Affairs and Special Events.

The Biennial’s core sites — the Chicago Cultural Center and the City Gallery in the Historic Water Tower — received 290,834 visitors throughout the exhibition, an 8 percent increase over 2015. Another 264,032 people visited biennial sites extended throughout the city and the region, including new community anchor sites made possible by the Chicago Community Trust: Beverly Arts Center, DePaul Art Museum, Hyde Park Art Center, DuSable Museum of African American History, the National Museum of Mexican Art and the National Museum of Puerto Rican Arts and Culture.

“Mark Lee and I were honored to serve as artistic directors of the second edition of the Chicago Architecture Biennial and to have the chance to enable artists and architects from around the world to address its “Make New History” theme. We feel incredibly lucky to have experienced the Biennial as both participants in the 2015 edition and as artistic directors for this edition,” Sharon Johnston said in the statement.

“In this transformative year for our practice, it has been incredibly meaningful to engage with architects and artists from around the world in questions of history and architecture as an evolutionary practice. The enthusiastic reception to the Biennial and its embrace by the general public confirms that our inquiry has launched a dialogue that has far-reaching significance which will resonate into the future,” Lee said.

The Chicago Cultural Center was again a departure point for tours to the Frank Lloyd Wright-designed SC Johnson headquarters in Racine, Wisconsin, where almost 9,000 guests toured and the Department of Cultural Affairs and Special Events’ downtown Expo 72 venue hosted a biennial partner exhibition produced with the Chicago Department of Planning and Development.

“It has been an honor for SC Johnson to serve as presenting sponsor for the Chicago Architecture Biennial. We’re proud to showcase Frank Lloyd Wright’s iconic designs and pleased to have played a role in the success of the program,” said Fisk Johnson, chairman and CEO of SC Johnson. “We take great pride in these structures and we’re thrilled that guests were able to experience what these buildings mean to our company and celebrate Wright’s work.”

The reach of the 2017 Biennial was boosted by more than 273 public program offerings, many of which were hosted by partners around the city, including exhibitions by the Alphawood Foundation, Graham Foundation, Art Institute of Chicago and the Museum of Contemporary Art Chicago.

A key piece of the Biennial’s programming was conducted with Signature Education Partner, Chicago Architecture Foundation, which engaged more than 10,000 students. Field trips to the Chicago Cultural Center engaged 40 neighborhoods around the city. 1,250 young people also participated in hands-on workshops sited in Chicago communities including at the Biennial Anchors. Another 2,760 students from universities globally and from the region also visited the biennial.

In addition, more than 1,000 students from 60 Chicago public schools participated in the BP Student Design Competition—an opportunity for aspiring artists and architects in Chicago’s elementary and high schools to create projects that challenged their creative thinking and skills using the Biennial’s “Make New History” theme as a starting point. The competition asked young, creative minds to explore how the past informs the present as they worked to design solutions for Chicago-centric challenges.

“The Chicago Community Trust was excited to be a part of expanding into Chicago’s communities, making it a true city-wide event,” said Sandra Aponte, program office for Arts and Culture. “The exhibitions at Beverly Arts Center, DePaul Art Museum, DuSable Museum of African American History, National Museum of Mexican Art, and the Puerto Rican Museum of Art and Culture reflected Chicago’s rich architecture and design heritage beyond downtown.”

Adding to the second edition’s success was an emphasis on the visitor experience and engagement. The biennial included the Welcome and Learning Center by Lendlease to orient visitors to the installations and programs held at the Chicago Cultural Center and throughout the city. A team of 290 volunteers helped make the Biennial accessible to a broader audience by greeting guests, ensuring wide distribution of multi-lingual exhibit and city guidebooks and conducting 200 free tours for 4,000 visitors to CAB.

The Welcome and Learning Center also served as a pin-up exhibition gallery, featuring rotating exhibits including by the American Institute of Graphic Arts (AIGA), Chicago Architectural Club and University of Wisconsin Milwaukee School of Architecture and Urban Design. Inspired its success, the Department of Cultural Affairs and Special Events plans to utilize the space as a Learning Lab in the future.

“Sharon Johnston and Mark Lee’s vision for the 2017 Chicago Architecture Biennial won critical acclaim from the profession both domestically and internationally as well as from Chicagoans and visitors to our city,” said Jack Guthman, chairman of the Chicago Architecture Biennial Board. “Engaging exhibits at the Cultural Center and in the neighborhoods, broad student participation across the city, the myriad of programs organized by the biennial and its partner organizations, tours to SC Johnson’s renowned Racine, Wisconsin campus, the generosity of corporations, the philanthropic community and individuals and unflagging support from Mayor Emanuel and the city’s Department of Cultural Affairs and Special Events combined to make the 2017 exposition a success—and provides a solid basis for the 2019 exposition.”

The funding for the event was privately raised, with significant investments from SC Johnson and BP.