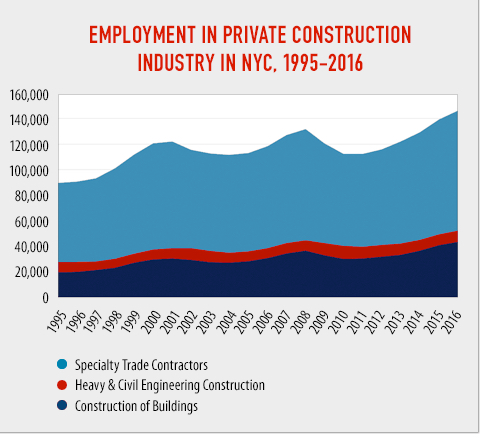 New York City construction industry employment rose for the fifth consecutive year in 2016, surpassing 140,000 for the first time in at least four decades, according to a New York Building Congress (NYBC) analysis of New York State Department of Labor employment statistics available since 1975.

In addition, the average annual wages earned by these workers increased by an estimated 5.4 percent in 2016, which represents the highest annual percentage increase since 2007, when wages increased 6.4 percent, and the first time since 2008 that wages had increased by more than 3 percent in any single year.

The NYBC analysis is based on a review of New York State’s Current Employment Statistics (CES) and Quarterly Census of Employment and Wages (QCEW).

Based on an analysis of jobs data from the first half of this year, the Building Congress estimates construction employment will rise slightly further – to 147,800 jobs in 2017.

The specialty trades sector, which includes plumbers and electricians, accounted for 93,900 jobs in 2016, up from 89,900 jobs in 2015. Workers involved in the construction of buildings accounted for 43,300 jobs last year, up from 41,000 the prior year. The heavy construction and civil engineering sector, which is primarily involved in major infrastructure projects, produced 8,900 jobs, up from 8,400 in 2015.

“Thanks to a virtually unprecedented building boom in both the residential and office sectors, the New York City construction workforce has grown by an impressive 30 percent over the past five years,” said NYBC president and CEO Carlo A. Scissura. “Just as importantly, about three-quarters of these well-paying jobs are going to residents of the five boroughs, further strengthening the city’s economy and tax base.”

While the heavy construction and civil engineering workforce remains the highest paid in the industry, average wages actually declined for workers in this sector – from $119,200 in 2015 to $116,800 last year. This workforce earned an average of $111,200 in 2014 and $107,900 in 2013. The decline in annual wages may have been associated with declines in overtime rather than a contraction in average hourly wages.

“Like the rest of the job market, construction industry wages finally seem to be catching up to job growth after lagging behind for most of the economic recovery,” Scissura said in a statement. “While this is great news for individual workers and their families, it remains to be seen what, if any, effect rising wages will have on the overall demand for construction services in New York City.”