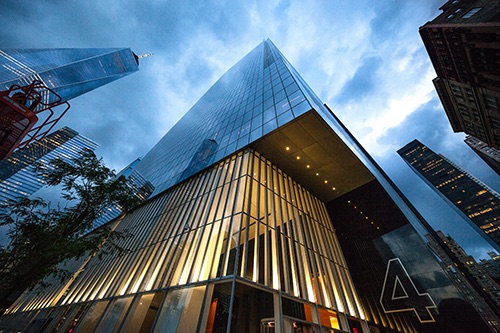 Project team members will be presented with awards from the American Institute of Steel Construction (AISC) during a ceremony at the tower on Wed., Aug. 30, at 4 p.m.

“This project has a complex structural system that is elegantly concealed,” said Chris-Annemarie Spencer, project architect at Wheeler Kearns Architects, and the competition’s architect juror.

This 72-story, 2.3 million sq. ft. office skyscraper serves as a beacon for businesses returning to downtown Manhattan; 250,000 daily commuters pass through the lower levels on their way to one of 13 subway or commuter rail lines that surround the tower. More importantly, the structure pays respect to the tragic history of the grounds commemorated by the National September 11 Memorial. More than a decade after the devastating attacks of Sept. 11, 2001, it became the first tower to open on the original 16-acre World Trade Center site.

The 13 IDEAS2 winners for 2017 were chosen from nearly 100 submissions throughout the U.S. The IDEAS2 award dates back more than 50 years with AISC.

“I hope the designers and builders know that this beautiful building is itself a monument to those we lost and those who helped on that terrible day,” said AISC president Charlie Carter. “It’s a testament to our nation, what we can do, and what we can overcome.”