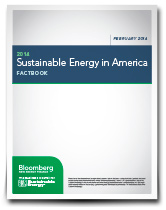 Special to the Design and Construction Report

The latest installment of the Sustainable Energy in America 2014 Factbook – produced for The Business Council for Sustainable Energy by Bloomberg New Energy Finance – has found that renewable energy, natural gas and energy efficiency advancements such as insulation are leading a transformation of America’s energy, a news release says.

Despite ever-shifting political winds, the inherent business case for efficient and sustainable energy sources has become even stronger over the past year. The 2014 Factbook documents the upward trajectory of energy efficiency, natural gas and renewable energy, using the latest data from 2013, and the edition adds yet another year of data to document the long-term transition to cleaner, lower-carbon sources of energy production.

Renewable energy provided 13 percent of U.S. electricity generation in 2013, up from 12 percent in 2012 and just eight per cent in 2007. At the same time, renewable energy costs reached all-time lows, allowing clean energy to be cheaper than fossil fuel electricity in some parts of the country. Small, distributed generators and off-grid installations, meanwhile, began to emerge as a transformative force in the power industry. Financiers who back small-scale solar systems have raised nearly $7 billion since 2008.

“The U.S. energy transformation that began in the mid-2000s gained additional momentum in 2013,” said Lisa Jacobson, president of The Business Council for Sustainable Energy. “The Factbook plays a vital role in chronicling this fast-moving transformation, which is creating whole new industries and thousands of new jobs in the energy efficiency, natural gas and renewable energy sectors.”

Energy efficiency financing is on an upward trend. Spending by energy service companies and by electric and gas utilities, often to comply with state efficiency resource standards, totaled more than $12 billion in 2012. Investment in smart-grid rollouts hit $3.2 billion in 2013, up from $1.3 billion in 2008. Meanwhile, 31 states and the District of Columbia, representing 77 percent of the U.S. population, have legislation in place to enable the financing of energy efficiency via property-assessed clean energy programs (PACE). What’s more, smart grid and smart home technology is on the horizon and will further drive efficiency gains in the years ahead.

“The 2014 Factbook further underscores that green construction is standard operating procedure in this country,” Blum said.  “PIMA’s members are proud to sponsor this important project. They understand their responsibility to provide an energy-efficient product that contributes to high-performing buildings.”

U.S. natural gas production and consumption reached all-time highs in 2013, solidifying the vital role that gas is playing in building a new energy economy. Investment in pipelines and storage facilities alone reached $15 billion. The natural gas share of electricity generation fell slightly from 31 percent in 2012 to 28 percent in 2013, but was still well above the 22 percent share in 2007. The slight dip in 2013 was due to a rebound from historically low gas prices the year before.

“We urge legislators and policy makers to clarify and stabilize clean energy policies both at the federal and state levels in order to accelerate America’s energy transformation,” Jacobson added. “Clean energy technologies have made major gains in the last five years, and further growth will help reduce greenhouse gas emissions, improve our energy security and strengthen the U.S. economy.”

Global trends in technologies and markets indicate that clean energy sources are positioned to win in the long run. Energy efficiency, renewable energy and natural gas are mainly responsible for the nearly 10 percent decline in U.S. greenhouse gas emissions since 2005, taking the country more than halfway to President Obama’s goal of achieving a 17 percent reduction in emissions by 2020. And Increased reliance on natural gas, energy efficiency and renewable energy are projected within the next several years to help make the United States a net energy exporter for the first time in the last half-century.