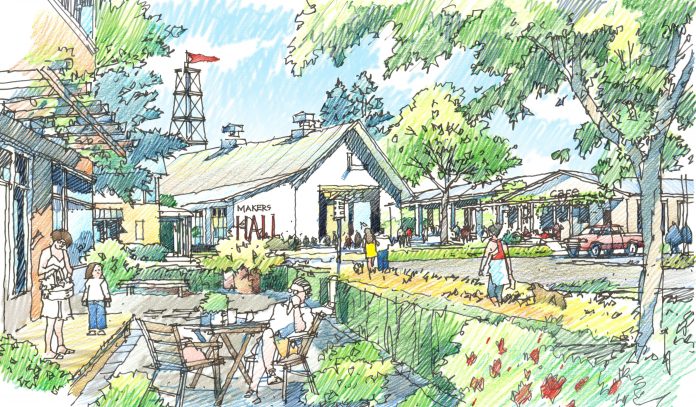 Charlotte City Council’s economic development committee has approved a request to allocate as much as $16.2 million from the city’s Community Investment Plan (CIP) and up to $15 million in reimbursement through a tax increment grant, both of which would help fund phase one of infrastructure improvements for the planned River District, the Charlotte Business Journal reports.

Charlotte developers Crescent Communities and Lincoln Harris won rezoning approval for the project last year. But the 1,400-acre site is mostly vacant, wooded land. To access it and develop the site, existing roads like West Blvd. must be widened and extended, and a new road network to handle the thousands of cars driving in and out daily, along with water and sewer systems.

“It really is the precursor to a lot of more development,” said Pat Mumford, director of neighborhood and business services in the city’s Economic Development Department. The first phase of the project could generate about $70 million in tax revenue, he said. “This isn’t just about a road, or a real estate transaction … It’s a big tax generator.”

The developers have committed to an additional $30 million for that first phase of road projects, which includes extending West Blvd., Garrison Rd. and Dixie River Rd.

River District has been called one of the last frontiers for large-scale development in Charlotte. There are plans to develop as much as eight million sq. ft. of office, 500,000 sq. ft. of retail, 1,000 hotel rooms, 2,300 single-family homes and 2,550 multifamily units across nearly 1,400 acres between the Catawba River and Charlotte Douglas International Airport. About 40 percent of the site will be preserved.

The first development phase is expected to kick off by 2021, following the initial phase of road and infrastructure projects, which could begin construction by 2019 following municipal design and planning. “This is an opportunity to leverage, through strong planning, the private sector and our intent to build a road,” said Mumford. “It brings (roads) to completion more quickly and also allows us to make sure that the design of the road works well for the development that’s being planned.”

To win support, the developers have been outlining the future economic benefits, jobs and tax revenue from the River District. According to a study they released, over 30 years the plan could bring about $600 million in net fiscal impact for Mecklenburg County (that’s the taxes, fees and other revenues from the development, minus expenses associated with providing services for the River District), while the city could generate about $302 million in net fiscal impact from the development.

Mumford said the $16.2 million in CIP money approved by the economic development committee was already allotted for roads in the Dixie-Berryhill area as part of a $44.7 million bond package approved last year.

Mumford and assistant city manager Debra Campbell said that by partnering with a private developer, road projects such as the West Blvd. extension — which were part of the city’s plans anyway — can be completed quicker. And, specific to River District, much of the land is unincorporated, so the developers may voluntarily annex the land.

Council member Ed Driggs said that while he supported the project, he questioned what precedent would be set by allotting public money to the River District’s specific private development project.

“A lot of developments, including Rea Farms, get done with no money from the city,” Driggs said. “When we talk about investing $30 million alongside a private developer, why are we doing that now and not in other occasions? Where does this number come from? Why not $20 million or $40 million?

“I think it’s a burden on us to account to taxpayers and other developers on the thought process,” he said.

“This project and Camp North End are the kinds of investments and utilizations of public resources we’re looking at,” Campbell responded. “This isn’t just investment in West Blvd. As a major thoroughfare, we’d be (improving it) anyway.”

The infrastructure improvement proposal will be reviewed at city council’s Sept. 11 dinner meeting, with a Sept. 25 council vote likely.